British Ambassador to Vietnam Gareth Ward has extended his condolences to the families and relatives of the victims who were found dead last month in a container truck in Essex, the UK. 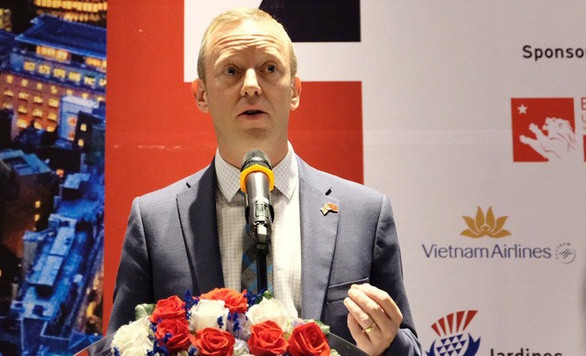 British Ambassador to Vietnam Gareth Ward
In a statement released on November 7 evening, the ambassador said: “Essex Police and her Majesty’s Senior Coroner have now confirmed that all 39 victims of the Essex lorry tragedy have been identified as Vietnamese. Each one of the victims has a family and comes from a community here in Vietnam. This is very sad news for us all.

“On behalf of the UK, I want to express my sincere condolences to the victims’ families and relatives. The next step will be to ensure that the victims can come home as soon as possible to their final places of rest.”

Earlier the same day, the Vietnamese Ministry of Public Security and British police announced that all 39 victims found dead on October 23 in a container truck in Essex, the northeast of London, are Vietnamese.

The Ministry of Public Security said the victims were from Hai Phong city and Hai Duong province in the north, and Nghe An, Ha Tinh, Quang Binh and Thua Thien – Hue provinces in the central region.
VNA