Chairman of the National Assembly Vuong Dinh Hue called on the EU to assist and share its experience with Vietnam in such areas as sustainable development, digital economy, etc. 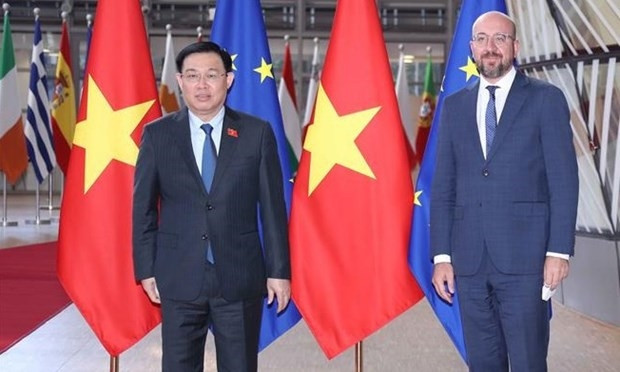 During their meeting in Brussels, Michel welcomed the working visit to the European Council and the EP by the Vietnamese delegation to discuss issues of shared concern across spheres, especially mutual support in the COVID-19 fight and post-pandemic recovery, and ASEAN-EU cooperation.

Pointing out the pandemic’s impacts on the progress and efficiency of the implementation of the EU-Vietnam Free Trade Agreement (EVFTA), he suggested the two sides work harder to optimise the deal’s potential.

Michel also shared his views on peace and security in Indo-Pacific and the rules-based order, and affirmed that the EU wants to expand and deepen cooperation with Southeast Asia, including Vietnam.

For his part, Hue said this is his first visit to Europe in his capacity as NA Chairman and on behalf of Vietnam’s high-ranking leaders in the new tenure, which demonstrates the importance Vietnam attaches to the EU and the EP.

The EU is a leading partner of Vietnam in terms of trade and investment, he said, noting that after more than one year of implementing the EVFTA, bilateral trade expanded 18 percent despite a range of difficulties caused by COVID-19.

The Vietnamese legislature has played an important role in the preparation, signing, ratification and implementation of the trade deal, and approved the revised Labour Code as well as the roadmap on joining fundamental conventions of the International Labour Organisation (ILO), Hue said.

He suggested the European Council continue to support businesses of the two sides and urge parliaments of EU countries to soon ratify the EU-Vietnam Investment Protection Agreement (EVIPA).

Hue called on the EU to assist and share its experience with Vietnam in such areas as sustainable development, digital economy, green economy, and high-quality personnel development. 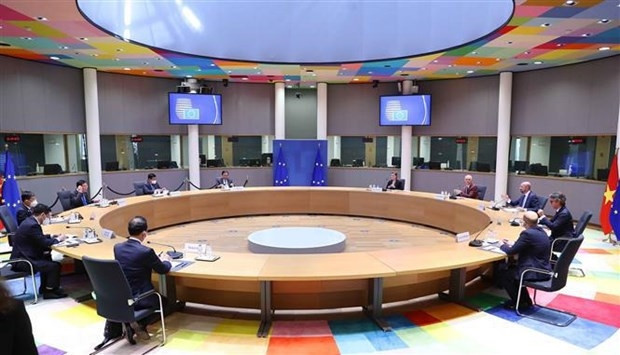 At the meeting (Photo: VNA)
Regarding the pandemic fight, Hue thanked the EU for its donation of 2.4 million doses of vaccines, saying he hoped that the European Council and the European Commission will prioritise Vietnam in accessing Europe’s vaccine sources via the COVAX Facility or sharing redundant vaccines, and provide the Southeast Asian nation with medical supplies and COVID-19 treatment drugs.

The top legislator said with its capacity and efforts to ensure vaccines for domestic demand and the region, Vietnam would like to receive the European Council’s support for cooperation in vaccine production in the country.

Vietnam has made efforts to deal with illegal, unreported and unregulated (IUU) fishing, he said, calling for the European Council’s support so that the European Commission will soon remove the “yellow card” against the country.

Vietnam also stands ready to cooperate with the EU in issues relating to human rights in the spirit of candidness, openness, mutual respect and understanding, he affirmed.

Hue also said Vietnam will continue to closely coordinate with the EU and the EP in multilateral cooperation mechanisms, and is willing to work as a bridge between the EU and the Association of Southeast Asian Nations (ASEAN).

The EU side pledged to further assist Vietnam in the pandemic combat, including the access to COVID-19 vaccines and drugs, and medical supplies.

For regional and international issues, they shared the view that in the face of COVID-19 and climate change, it is necessary to restructure the global economy and join efforts and actions to respond to climate change.

They voiced their support for an ASEAN region of stability, peace and prosperity, and maintaining security, safety and freedom of navigation and aviation on the basis of respect for international law, including the 1982 United Nations Convention on the Law of the Sea (UNCLOS).
VNA