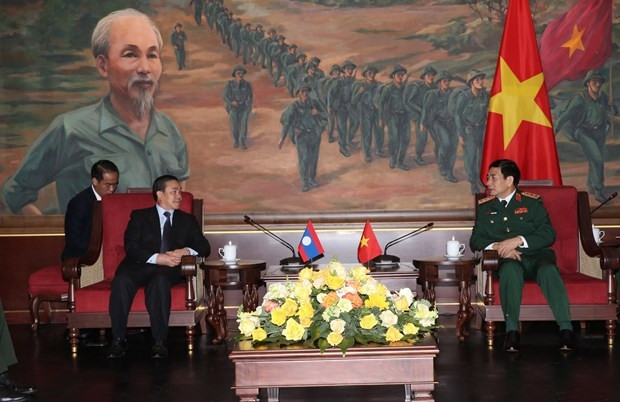 The two sides affirmed that the defence cooperation is an important pillar of the bilateral ties, and significantly contributes to national construction and defence of each country.

Given the unexpected developments of the regional and international situation, the two countries should maintain and tighten the traditional friendship and special solidarity, and the defence ties in particular, they said.

They agreed to step up the exchange of delegations, especially those at the high level, in order to discuss strategic issues of shared concern, and enhance collaboration across spheres, especially defence and military.
Minister of National Defence Senior Lieutenant General Phan Van Giang (right) and Cambodian Ambassador Chay Navuth (Photo: VNA)
At a meeting with Cambodian Ambassador Chay Navuth, Giang spoke highly of efforts by the Cambodian government, army and people in the COVID-19 combat.

They shared the view that defence collaboration is one of the major pillars of the relations between the two countries, and consented to step up delegation exchanges in the time ahead.
Minister of National Defence Senior Lieutenant General Phan Van Giang (right) and Chinese Ambassador Xiong Bo (Photo: VNA)
During a reception for Chinese Ambassador Xiong Bo, Giang affirmed that Vietnam attaches importance to its relations with China, and will make all-out efforts to consolidate and strengthen the time-honoured relationship and the comprehensive strategic cooperative partnership with the neighbouring country.

The minister briefed the ambassador on upcoming defence external activities to be held by Vietnam and China in the time ahead.
Minister of National Defence Senior Lieutenant General Phan Van Giang (left) and Russian Ambassador Konstantin Vnukov (Photo: VNA)
Meeting with Russian Ambassador Konstantin Vnukov, the minister said Vietnam always treasures the long-standing relations with Russia, and will do its utmost to promote the comprehensive strategic partnership between the two countries, covering collaboration in national defence and technical military.

He called on the ambassador, in any position, to make more contributions to the bilateral ties.

The countries are working hard to prepare for the Army Games this year.
VNA