The 18-page report said all claims of China related to “historic right” over the East Sea do not hold any legal value. 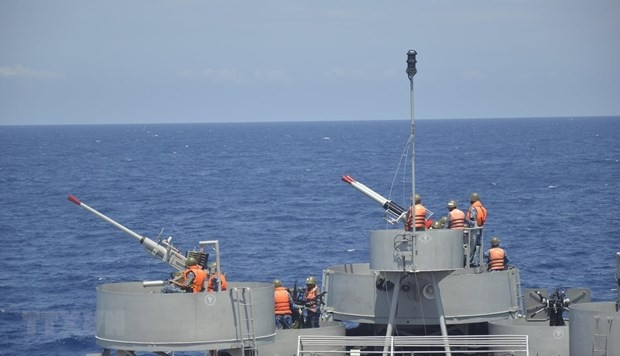 At a naval training session at sea (Photo: VNA)
The Permanent Court of Arbitration’s 2016 ruling that rejected China’s irrational claim over 80 percent of the East Sea held great significance in the legal process in the area, according to a thematic report by two Russian scholars.

The report by Dr. Alexander Korolev and Dr. Irina Strelnikova was recently announced by the Higher School of Economics of Russia’s Centre for Comprehensive European and International Studies.

The scholars wrote that the ruling is based on standards and principles of international law. They also underscored a need to abide by rules and principles in disputed areas in line with the 1982 United Nations Convention on the Law of the Sea (UNCLOS).

The 18-page report said all claims of China related to “historic right” over the East Sea do not hold any legal value.

Analysing the complicated situation in the East Sea, the authors hailed several ASEAN member states for offering initiatives to address the disputes. They also highlighted the importance of solidarity and unity in ASEAN and its central role in ensuring regional security.

Commenting on the PCA’s ruling, Vietnamese Foreign Ministry’s spokeswoman Le Thi Thu Hang said Vietnam’s stance on the settlement of disputes in the East Sea is clear and consistent. Accordingly, Vietnam always supports the settlement of disputes regarding sovereignty, sovereign rights and jurisdiction over the East Sea via diplomatic and legal processes, without the use of force or threat to use force, and via peaceful means in accordance with the UN Charter and the 1982 UNCLOS.

As a UNCLOS signatory and a coastal nation to the East Sea, Vietnam asks all parties concerned to respect and fulfill legal obligations as stipulated in the UNCLOS, as well as work closely together to make active and practical contributions to maintaining peace, stability, security, maritime and aviation safety and freedom, and order in the East Sea based on international law, she said.
VNA