The Stork Island and Hoi Yen village in Thanh Mien district have been included in several tours taking visitors through many attractions in several districts of Hai Duong. 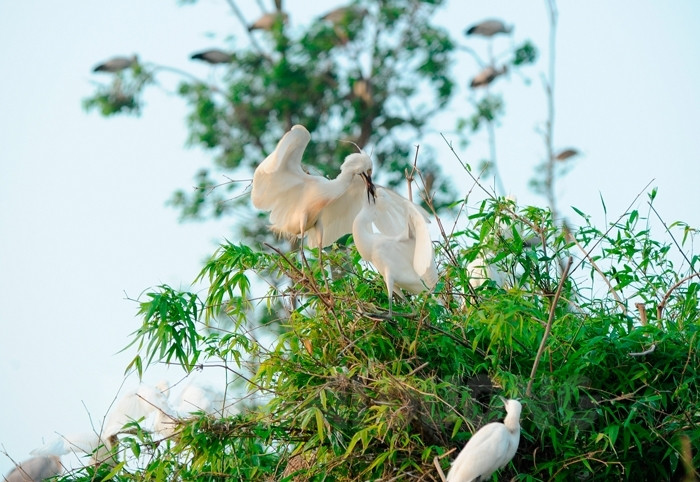 One of the most prestigious historical and cultural relics in Thanh Mien, and also in the northern province of Hai Duong, is Dong temple in Dong village, Thanh Tung commune, about 20km from Hai Duong city.

Built in the 16th century, the temple was first restored in the 18th century. Its special wooden structure includes sculptures of dragons and pearl patterns bearing typical engravings of the Hau Le (Latter Le) Dynasty (1428-1789).

Dong Temple was established to worship Nguyen Phuc and Do Uong – two famous honorable men of King Le Thanh Tong and the Phuc Mac reign in the 15th and 16th centuries, respectively.

Dong village is also home to an important historical relic, which is the memorial site dedicated to Nguyen Luong Bang (1904-1979) who held the post as Vice President of Vietnam from 1969 to 1979.

Nguyen Luong Bang was born into a poor family with patriotic traditions in Dong village. Throughout his life, he used the alias Anh Ca and Sao Do. He joined the Communist Party in October 1929. After the August Revolution, Nguyen Lương Bang held the post as General Director of the National Bank of Vietnam, the first ambassador of Vietnam to the Soviet Union (1953-1956), head of the Central Commission for Inspection, government (1956). In September 1969, he was elected Vice President of Vietnam.

The memorial site was built in his home village in 1996.

Some 16km from Dong temple there is Chi Lang Nam Stork Island, which is a recognized national relic site.

With a total area of over 31.6 ha, the Stork Island is located in the middle of An Duong Lake in Chi Lang Nam commune.

The island is home to about 170 flora and fauna species. From the ninth lunar month to the fourth lunar month of next year, thousands of storks, herons and other water birds flock to the island to search for food. It is estimated that around 16,000 storks and 6,000 herons are making their nests on the island.

The Stork Island has been designated as an eco-tourism destination. The best time to visit the site is between September and next year’s April. At present, it already welcomes thousands of visitors a year.

Not far from the Stork Island there is Hoi Yen village which is widely known for its dry rice noodle. Villagers began to make the product in late 18th century. Visitors can try their hand at making the noodle, from selecting the suitable rice, soaking and grinding rice, spreading the flour in a thin layer, laying the rice paper outside for drying to cutting the rice paper into thin strips.

The Stork Island and Hoi Yen village have been included in several tours taking visitors through many attractions in several districts of Hai Duong. One of which is the community-based tour starting from the Stork Island through Cho Giao (Giao Market), Mau temple, local orchards and ending at Hoi Yen rice noodle village.

Adding to the great potential, the expansion of the transport network in Hai Duong over the past recent years is opening up vast opportunities for Thanh Mien district to develop tourism, thus contributing to local social and economic development.
VNA