Coming for a martial art exchange, visitors from Son Long Martial Art School in Seine-Saint-Denis (France) have had enjoyable experiences in the Eastern land of Hai Duong. 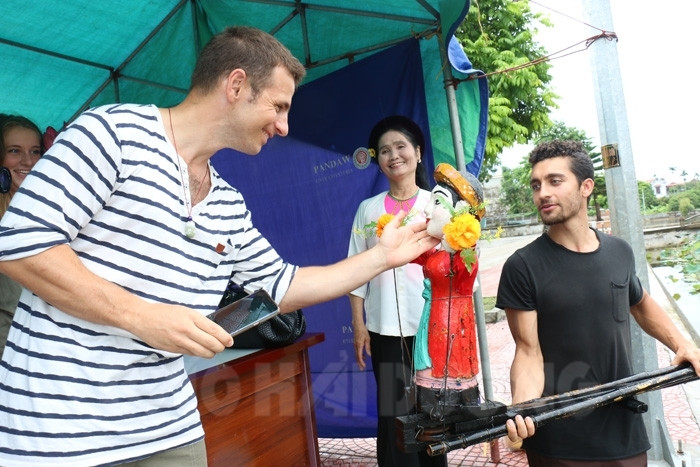 "Our delegation planned to return to Ha Noi after the martial art exchange in Hai Duong right within the day and fly back to France on the next day. However, finding your city peaceful and every resident hospitable and being told by our interpreter that there were many interesting things here to explore, so we decided to stay two more days," said Bertec.

During 48 hours in Hai Duong, the delegation members spent maximal time learning about the land and people there.

Shaina Bertec (20 years old) and the disciples spent an hour walking and exploring the life of residents along the Sat river, streets, and some shopping, eating, and drinking venues in Hai Duong city.

She said this was her first visit to Ha Noi and Hai Duong. Compared to Ha Noi, Hai Duong was plainly beautiful, relatively peaceful, and quiet. People were good-humored, friendly, and willing to guide and help foreigners.

The thing that Shaina Bertec and her friends loved most in Hai Duong was that there were many tasty dishes.

"Pho (noodles) and nem ran (spring rolls) here are wonderful. I once ate the two dishes at a Vietnamese restaurant in France, but the taste here is much better. This morning, I tried bun ca ro (vermicelli with anabas) while my friends enjoyed banh cuon cha (steamed rice crepe with fried chopped meat)," said Shaina Bertec.

Philippe Bertec was also very fond of rich food at Hai Duong restaurants. Apart from dishes made of chicken and beef, he ate a lot of hotpots and fried vegetables.

"Chefs at restaurants here are so good. They know how to cook many eye-catching and appetizing dishes. You know, I have tried tiet canh vit (duck's blood curd) and it was very tasty. I will never forget these fantastic experiences," said Philippe Bertec.

Though having been to Vietnam for many times, this was the first visit of Evelyne Boscheron (63 years old), Chairwoman of the Council of Son Long Martial Art School, to Hai Duong city. Similar to Shaina Bertec, Evelyne Boscheron really loved the locals' amiability and the city’s peaceful beauty.

"Your city is small but peacefully beautiful. I love markets on small streets and even lakeside hotels from which I can contemplate the life around. Staying here for exploration was a right decision," said Evelyne Boscheron.

Due to limited time, after study, the delegation from Son Long Martial Art School decided to only visit and explore Thanh Hai water puppetry troupe in Thanh Ha district.

The delegation members were interested in watching performances of artisans at Thanh Hai water puppetry troupe. They passionately watched and recorded the artisans' performances.

Philippe Bertec said they had watched puppet shows of Vietnamese artisans on land in France. This was the first time they had enjoyed a water puppet show. Compared to land puppetry, water puppetry was more lively and attractive thanks to lyrical performance space close to nature plus the support of music, MCs, and flares.

"It was great to see a water puppet show in a lotus pond with peaceful scenery like this. I was very surprised to know that the puppeteers were farmers," said Philippe Bertec.

After the show, the delegation from Son Long Martial Art School learnt about and listened to introductions on puppets.

Leaving Hai Duong with many beautiful memories, all members of the French delegation were satisfied. They did not forget to give recommendations so that more and more foreign visitors would go to the province.

"Your province has many things worth exploring and experiencing. Nonetheless, the most valuable thing is that local people are very hospitable and kind, making us foreigners feel very secure and pleased," said Evelyne Boscheron.

"If the authorities better promote, plan, and develop tourism destinations and products right within the city, I think your tourism sector will be much better.

"Yet, pay attention to protecting the city environment first because I have noticed many places not really clean."
TIEN MANH