The Vietnam Football Federation believes that the referee made an inaccurate decision in the Vietnam-Australia match that affected the game’s eventual results. 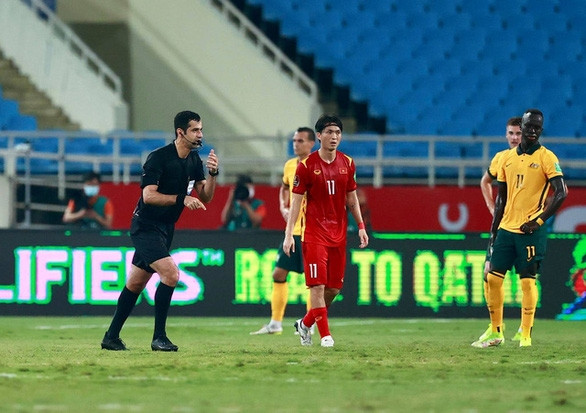 Referee Al-Jassim during the Vietnam - Australia match
The Vietnam Football Federation (VFF) has asked the International Federation of Association Football (FIFA) and the Asian Football Confederation (AFC) to step up the inspection and assessment of the quality of referees.

In a letter addressed to FIFA President Gianni Infantino and AFC President Salman Bin Ibrahim Al-Khalifa, VFF Vice President Tran Quoc Tuan extended his thanks for their support for the VFF to organise the Vietnam - Australia match on September 7 at the My Dinh National Stadium in Ha Noi, amid complexities brought by the COVID-19 pandemic.

The VFF supports and appreciated the decision of the FIFA and AFC on the use of video assistant referee (VAR) during matches of the final stage of the 2022 FIFA World Cup Asian qualifiers, he said, adding that the September 7 game was the first match that VAR had been applied in an official international football event hosted by the Vietnamese football body.

However, the VFF believes that the referee made an inaccurate decision in the Vietnam-Australia match that affected the game’s eventual results.

As a responsible member and in the hope of contributing to ensuring fairness and prestige in FIFA and the AFC’s official tournaments, the VFF calls on the two football governing bodies to strengthen inspection and evaluation on the quality of referees, in a bid to effectively officiate upcoming matches and protect images and prestige of the final round of the World Cup qualifiers.

Vietnam will play China at a neutral venue on October 7, according to the VFF.

The match is to take place at Shajah Stadium of the United Arab Emirates (UAE).

The team of coach Park Hang-seo will travel to Oman to face the hosts five days later.

Vietnamese footballers are to convene a training session on September 16.

After two matches of the third stage of the qualifiers, Vietnam ranked fifth in Group B, with Australia being top of the group.

This is the first time Vietnam have ever played in such a round of World Cup qualifiers.
VNA