Tank Crew No. 1 of the Vietnam People’s Army shot down all five targets and completed the race in 24 minutes and 58 seconds. 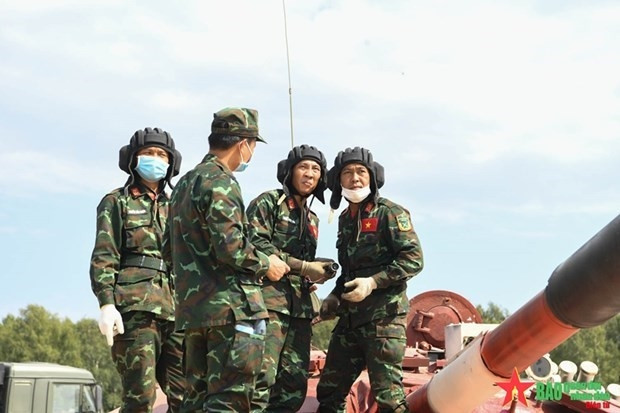 Vietnamese tank crew secures group’s second place at Army Games 2021 (Photo: Qdnd.vn)
Vietnam finished second in Group 1 of the qualifying round of the “Tank Biathlon”, held at the Alabino military training ground in the suburbs of Russia’s Moscow, at the ongoing International Army Games 2021.

Tank Crew No. 1 of the Vietnam People’s Army (VPA) shot down all five targets and completed the race in 24 minutes and 58 seconds.

Colonel Phan Hai Long, captain of the VPA’s tank team said Tank Crew No. 1 performed well and completed its task in accordance with tactics and techniques set out for the team.

Two other tank crews of Vietnam will continue competing on August 26 and 29.

This year, there are 19 teams participating in the “Tank Biathlon”, divided into two groups.

The best eight teams will then enter the semi-final round.

The  International Army Games 2021 takes place from August 22 to September 4, featuring the participation of 275 teams from 42 countries and territories worldwide competing in 34 categories.

The latest event marks the fourth consecutive year the VPA has taken part in the international-level military multisport event.
VNA