The Vietnamese men’s U22 team trounced Laos 6-1 in their second match of Group B at the 30th Southeast Asian Games (SEA Games 30) in the Philippines on November 28. 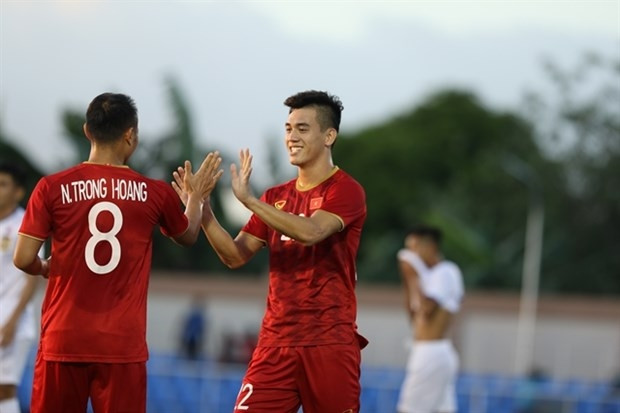 Striker Nguyen Tien Linh (right) celebrates his goal with Nguyen Trong Hoang in the match between Vietnam and Laos in their second football match of Group B of the 30th SEA Games on November 28 (Photo: VNA)

Vietnam dominated the match against the minnows from the opening whistle, and only three minutes in striker Nguyen Tien Linh pounced on a Laos mistake to open the scoring.

In the 17th minute, Linh of Becamex Binh Duong Club doubled the advantage after being played through by Ho Tan Tai.

Two minutes later, defender Doan Van Hau, who is on loan at SC Heerenveen of the Netherlands, put the ball in the net with a lob but he was ruled offside.

Laos struggled to launch attacks on the strong Vietnamese side and only threatened goalkeeper Nguyen Van Toan once, but he was equal to the task.

After the break, Vietnam peppered the Laos goal with shots from Nguyen Duc Chien, Trieu Viet Hung and Hau’s shots.

The Vietnamese side’s efforts paid off with a third goal in the 54th minute, scored by over-22 midfielder Do Hung Dung after a delightful one-two with his Hanoi FC teammate Nguyen Quang Hai.

Three minutes later, Linh completed his hat-trick to raise the score to 4-0 for Vietnam.

Laos fought till the end and were rewarded with a goal in the 60th minute, courtesy of a header from Kaharn Phetsivilay after a free-kick was whipped in.

Soukaphone Vongchiengkham then missed a chance for a second goal from a free-kick which Toan saved.

With the result safe, the Vietnamese took their foot off the gas to preserve their strength for the next match.

However, midfielder Nguyen Trong Hoang and Hai managed to tack another goal on each in the closing stages to make the score 6-1.

In the first match on November 25, Vietnam defeated Brunei 6-0.

Vietnam will next play Indonesia on December 1 at 7pm (Hanoi time).