The Vietnam People’s Army (VPA)'s delegation ranked 7th out of 43 military delegations at the International Army Games 2021, which wrapped up on September 4. 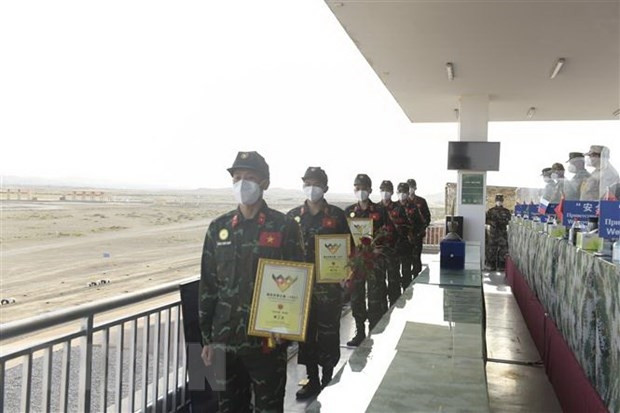 Members of the VPA's chemistry team receive group and individual prizes at the event (Photo: VNA)
For the fourth time participating in the Games, the Vietnam People's Army's delegation overcame difficulties in terms of weather and pandemic, and joined intense training activities, to perform well at the event, securing one gold, two silver and four bronze medals, and many individual awards.

With 34 medals, the host Russia ranked first in the medal tally at the event.

According to Maj. Gen. Pham Van Thai, Deputy Director of the Department of Military Training under the VPA’s General Staff, who led the Vietnamese delegation, Vietnam sent 17 teams to compete in 15 out of 34 categories at the International Army Games 2021.

The event marked the first time ever Vietnam has hosted the "Sniper Frontier" and "Emergency Area" competitions.

Talking to the Vietnam News Agency’s correspondent in Russia on the sidelines of the closing ceremony, Maj. Gen. Aleksandr Peryazev, a referee of the Games, highly valued Vietnam's thoughtful preparations for and good organisation of the sniper and rescue events.

This was a great pride of Vietnam and Russia when the flags of the two countries and the Army Games flag were raised in Vietnam, he said.

Sen. Lieut. Dmitry Stukhanov, liaison officer of the the Organising Committee of the Army Games 2021, praised the VPA’s teams for their professional skills and competitive spirit, and expressed his special impression with the enthusiastic cheers of Vietnamese fans at the event.

According to the Organising Committee, more than 1.5 million people watched and cheered for the teams competing in Russia and the host countries of the International Army Games 2021.

The organisation of the Games ensured the safety in the context that the COVID-19 pandemic is still complicated in many countries hosting and participating in the Games.

The International Army Games 2021 was held from August 22 to September 4. A total of 260 teams from 45 countries and territories participated in the event, competing in 34 categories.
VNA