Coach Park Hang-seo said he regretted Vietnam's 1-0 loss to Australia in Ha Noi on Tuesday, but based on the performance, the sides were nearly the same quality. 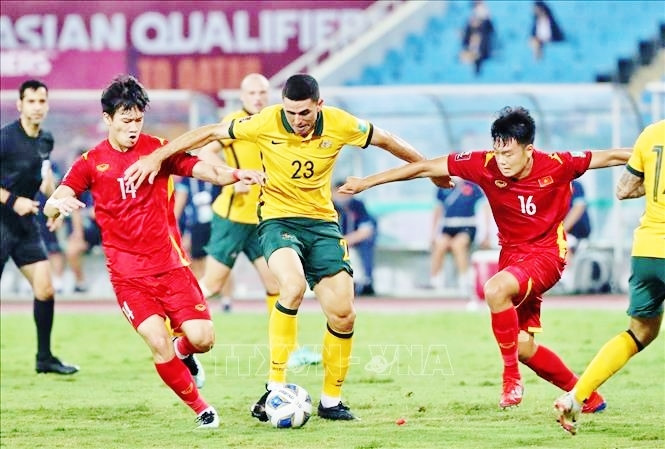 Footballers of Vietnam (in red) and Australia vie for the ball (Photo: VNA)
Rhyan Grant’s first-half header near the end of the first half proved enough to see off Vietnam at the My Dinh Stadium during the World Cup qualifier.

"It is the first time that Vietnam are taking part in the third-round qualifier of a World Cup. Their rivals are all leading continental teams. Vietnamese players performed really well and strictly followed our tactics. In terms of technique, there is no big gap between Vietnam and Australia, though we are smaller than them physically," Park said in the post-match briefing.

"About the goal loss, if my defender chose a better position in that situation, Vietnam would not concede that goal. I feel regret about this loss."

Park also spoke about the denied penalty for the hosts, saying: "The referee watched VAR. He maybe thought that the defender did not intend to touch the ball. I respect his decision."

"We have done all we can. We worked hard and played our best this month. But they are really strong. I am proud of my team and teammates," he said.

Australia coach Graham Arnold said Vietnam were a tough rival who created a lot of difficulties for his team. He said he was pleased with three points and Australia still had many things to do in the coming games.

The Vietnamese players will be released for one week before they return for training on September 18 for two matches, against China on October 7 and Oman five days later.

But one of his defenders Nguyen Thanh Trung might be absent as he has a torn thigh, which will take weeks to recover.

Currently in Group B, Australia are on top with six points, followed by Saudi Arabia then Oman.

Vietnam are in fifth, one place above China.
VNS