Vietnam beat the Philippines 2-1 in the first leg of the ASEAN Federation Football (AFF) Suzuki Cup 2018 semifinal, which took place at Panaad Stadium in Bacolod of the Philippines on December 2. 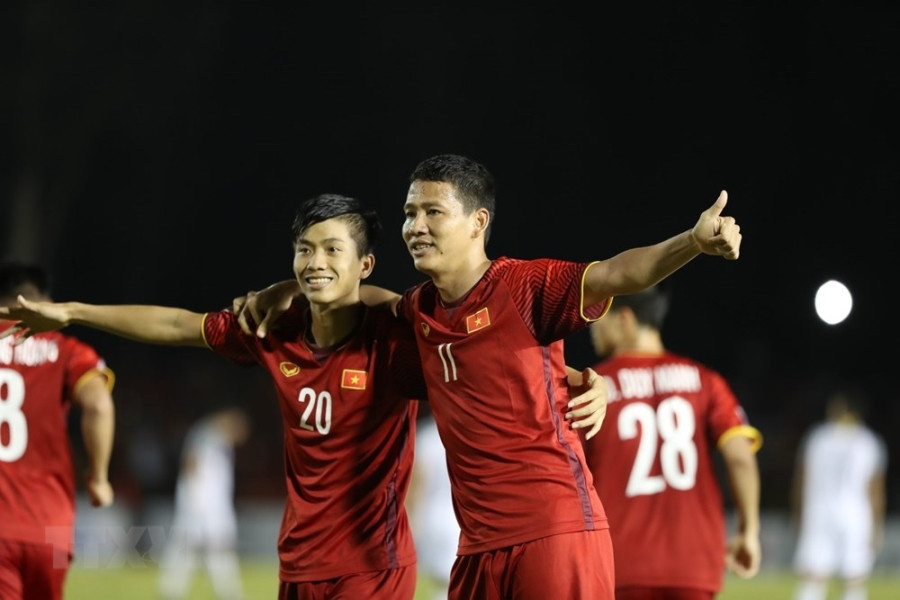 Vietnam’s Van Duc (left) and Anh Duc celebrate after scoring a goal. Photo:VNA
During the first 16 minutes, the Vietnamese team controlled the ball more with 52 percent.

At the 12th minute, receiving a pass from Van Hau, Anh Duc headed the ball to the goal of keeper Falkesgaard, making the first score to Vietnam.

During the extra time in the first half, the equaliser was made for the Philippines when captain Phil Younghusband passed the ball to Reichelt who hit the goal, the first hitting Vietnam’s goal during the tournament.

In the second half, at the 48th minute, Van Duc broke the offside position after receiving the ball from Trong Hoang, scoring the second goal for Vietnam to the burst of thousands of Vietnamese fans.

The Vietnamese team made more attacks in the last minutes but no more goal was scored.

This is a positive result for the Vietnamese team as the semi-final return leg will take place at Hanoi’s My Dinh National Stadium on December 6 in the sea of Vietnamese fans.

The AFF Suzuki Cup 2018 is taking place from November 8 to December 15 with 26 matches among 10 teams. Vietnam’s national men’s football team is in Group A together with fellow Southeast Asian teams, Malaysia, Myanmar, Cambodia and Laos.

In the tournament’s history, Vietnam won the championship just once in 2008. With the leadership of coach Park Hang-seo and the current squad, both Vietnamese and Korean football fans are hopeful that the S-shaped country’s team will take the trophy for the second time after 10 years awaiting.
Vietnam+