Hai Duong city authorities are urgently completing plans for a central square at the city stadium and a community cultural and sport complex at the People's Theater to report to competent authorities. 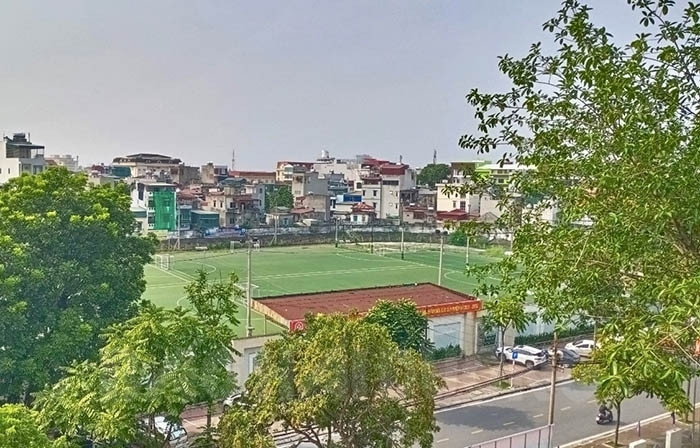 The stadium of Hai Duong city will be turned into the central square to serve residents
These are modern works in harmony with space, close to nature, and creating highlights for the central area of the city.

Born and raised in Pham Hong Thai street, Nguyen Van Tam and his friends often mention locations associated with the history of Hai Duong city whenever they meet.

Among them, the then town stadium and People's Theater were familiar places of the town's youth. The turning of the works into the central square and community cultural and sport complex is information interested in by Tam as well as other Hai Duong citizens.

After the provincial authorities had approved the turning of the city stadium into the central square, the city People's Committee finished planning with an area of about 1.66 ha.

There will be chessboard-shaped walkways, items serving people's needs for rest and entertainment, trees, escalators to basements, children's playground, and a meditation garden with a sport area, symbolic works, and a stele commemorating Uncle Ho's visits to the town in the square.

In addition, two basements for commercial services and parking were also planned...

Regarding the People's Theater area, following the direction of the provincial Party Committee's Standing Board, the city People's Committee chose a consultancy, conducted a survey, and planned the construction of the community cultural and sport complex.

There, all works, symbols, and vestiges kept after construction are associated with history and mark Uncle Ho's visits to Hai Duong and talks with the townfolk.

Mixture of history and modernity

The city People's Committee intends to use the entire land of the People's Theater and some surrounding areas to build the community cultural and sport complex on an area of about 8,432 m2.

It is expected that there will be a circular cultural house – club symboling the sun and centripetally stone-paved yards and gardens like light rays carrying the historical significance of the name Hai Duong (sunlight from the coastal region).

In the cultural house – club, there will be a table tennis practicing zone, cultural and artistic creation space, and several service booths.

There will be trees with large canopies of leaves, a playground, and walkways in the flower garden – square. A suitable place was planned there to show the vestiges of the ancient Vong house and images of Uncle Ho's visits to Hai Duong.

On July 26, 1962, Uncle Ho visited Hai Duong for the 4th time and talked to the townfolk in the yard of Vong house. He praised Hai Duong's progress in all aspects compared to his 2nd visit in 1957.

Before the People's Theater was built in 1973, located in the area was Vong house, a place to offer sacrifices and kowtow Hue capital, showing love and respect for kings and praying for favorable weather.

The city authorities have proposed the option of keeping the gateposts of Vong house when building the community cultural and sport complex as evidence of a historical and cultural work in the past.

Regarding the central square, due to its importance and location in the central area with a large scale and investment, the city People’s Committee has requested the provincial authorities to consider the mechanism of inviting and selecting investors for implementation.

As for the community cultural and sport complex, it is expected that most of funds will come from the auction of land use rights and part of the budget and the construction of the complex will begin in 2022.
TIEN HUY