After three days of official competition, Vietnam ranked eighth among 43 countries and territories joining in the International Army Games 2021 as of August 25. 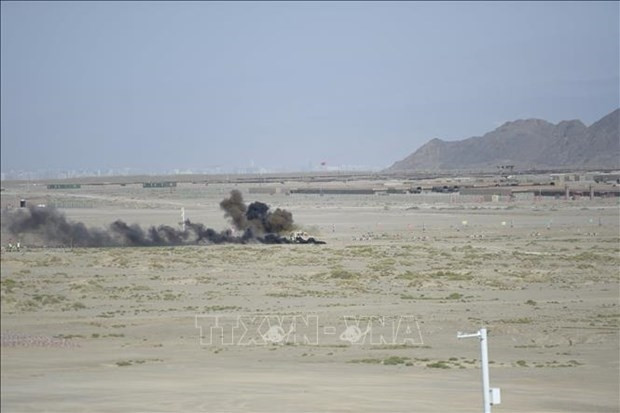 The Vietnam People’s Navy team came first in the AK-176 cannon shooting event at the Sea Cup category in Vladivostok, followed by Russia and China.

Meanwhile, Vietnamese engineering team had an excellent game in the qualifying round of the “Safe Route” contest on August 25, sustaining a berth at the final round that is slated for Augst 29. In the qualifying round, Vietnam is in the same group with Egypt, India and Venezuela.

Vietnam won bronze medals in the category in 2019 and 2020. In the Army Games 2021, the Vietnamese engineering team aims to bring home a silver medal.

Also on August 25, at Frunze Theater in Moscow, the Vietnam People’s Army Art Troupe took part in the traditional musical instrument duet competition as part of the “Army of Culture” category.

Meanwhile, the chemistry team of the Vietnam People’s Army participated in the “Safe Environment” category at Korla military base in China's Xinjiang Uygur Autonomous Region the same day.

The Vietnamese team, comprising 20 officers and soldiers, was divided into two groups and competed with their rivals from China and Belarus.

The International Army Games 2021 is hosted by Russia with 36 competitions in 12 countries and territories.

The delegation will attend the competitions of Vietnamese teams in Russia to encourage the teams.
VNA