Managing to model houses for decoration or presentation from easy-to-find materials is some people’s hobby with power to spread love for beauty and passion in the community. 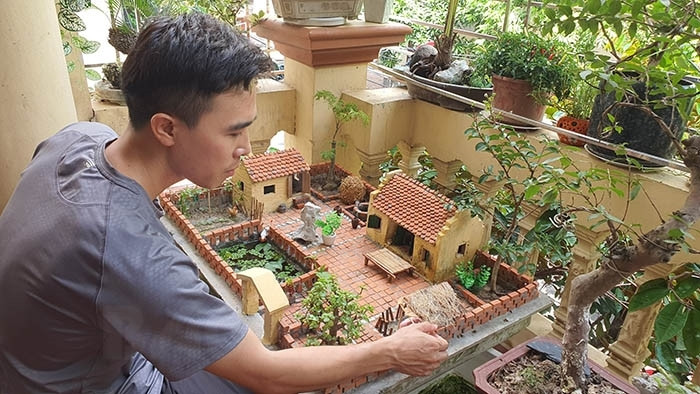 Vu Thach Duong, 21 years old, living in Binh Han ward, Hai Duong city, has more than 31,500 followers on his Facebook page with many posts drawing hundreds of emotions and comments and dozens of shares. He is the author of many models of riverside houses effusively praised by many people.

Talking about his hobby, Duong said he was strongly impressed by a miniature model of houses and rivers in 2018 and tried making a model out of cardboard after that.

However, after only a few days, he threw away the model since it was ugly and unsteady because of his inexperience.

Several years later, having free time when about to graduate from Hai Duong Vocational College last June, he managed to create Western riverine miniatures to decorate his fish tank.

Such seemingly trivial details took him much effort from shaping to perfection to create lifelike miniatures.

It took him about a week to complete the first model but only 2 – 3 days for the next ones, which were increasingly eye-catching.

After completion, he took and posted photos on his page, from which many posts were shared widely, and more and more people knew about this young man's talent.

Not only doing by himself, he has also guided his friends to do it together to satisfy his passion. Many people love and ask to buy his products for several million dong to more than 10 million dong each.

From the intention of decorating his fish tank, Duong has created house models imbrued with old features that are loved by a lot of people.

Three months ago, when surfing Facebook, Nguyen Xuan Truong, 34 years old, living in Pham Ngu Lao ward, Hai Duong city, saw the miniature model of an ancient Northern house. He was immediately interested, learnt how to make, and ordered such materials as bricks, tiles, sand, cement, and baking knives worth a total of about VND1.5 million to remake the model.

He also joined in a group of those loving models and miniatures on a social networking site and looked for instructional videos to learn model making.

“I wanted to remake the model because it showed part of the traditions and history of the nation and ancestors, thereby educating my children on the traditions,” Truong recalled.

“Looking at the model, my children understood what the houses of their grandparents and ancestors consisted of and how rural people lived in the past.

“During remaking, I also guided my children to make miniature items associated with farmers like buckets, hoes, or small bamboo beds to both help them understand the traditions and create more useful activities for them in the summer.”

Before construction, he sketched the model on paper. As a public servant, he could only reserve 1 – 2 hours in the evening and on weekends to do it with assistance from his wife and children.

Working in a field unrelated to construction, so at first, he failed many times because bricks, sand, and cement were too small, the mixture ratio of cement and sand was not suitable, he did not know how to plaster walls, etc. Sometimes he was disheartened and had to stop for a few days before regaining his spirit to continue.

After having built the main works, such as a house, a kitchen, a fish pond, a well, fences, and a gate, he kneaded clay into gourds and cut plastic leaves to decorate the yard.

Not until nearly a month later did he complete his model with a traditional tiled house, in front of which were a small bamboo bed and the fish pond, the kitchen next to the house, a pile of straw, the well, a gourd trellis, flocks of chickens and ducks, etc.

The model is 100 cm long, 60 cm wide, and currently placed on the balcony of the 2nd floor.

He plans to make a model of his grandparents' old house, which was demolished and rebuilt, in the coming time.

“I lived in that old house for five years with my grandparents, so to me, the house kept a lot of good memories of my childhood, and I still vividly remember every corner, every simple item in the house. Therefore, when I have time, I will rebuild the house from my memories, thereby sharing my needy but happy childhood with my children to gradually build a sense of traditions in my children,” said Truong.
BINH AN