Standing side by side with workers

In the face of complicated developments of Covid-19, trade unions at all levels in Hai Duong province have shown their roles and responsibilities more clearly, creating a solid support for laborers. 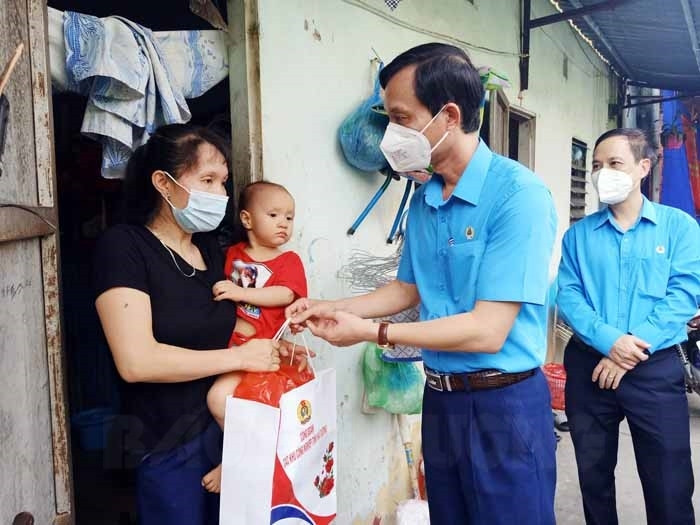 Sky Dragon Vietnam Co., Ltd. in Tu Ky district is employing about 3,500 workers. Many of them have worked for the enterprise for a long time. The company's trade union has asked the business owner to work out many policies to take care of the employees' lives.

Upland workers are supported with lodgment rents, each employee receives VND120,000 – 200,000 for transport each month, and those having children under six years old are monthly supported with VND50,000/ person. The company pays for the testing of workers from Thai Binh province and Hai Phong city for SARS-CoV-2.

"The trade union proposed all policies for and interests of workers to the company's board of directors. We always want to provide the employees with a good working environment and stable income," said Dao Thi Xuan, chairwoman of the company's trade union.

Facing workers' difficulties due to the impact of Covid-19, the Trade Union of the provincial Industrial Zones has assisted disadvantaged trade-unionists with house repair costs.

The trade union is asking superiors to support workers who are F0, F1, and F2 cases and people in difficult circumstances in quarantine areas during the current epidemic wave, starting from July 28, with the motto "leaving no one behind."

In the first eight months of the year, trade unions directly above the grassroots level presented 7,516 gifts with a total amount of more than VND1.6 billion to laborers in isolation, blockade, and lodgment areas or away from home.

The provincial Confederation of Labor offered 55.7 tons of rice and many other necessities to laborers and anti-epidemic forces.

The remaining cases, consisting of those medically isolated at home, nonlocal people working in Hai Duong, living in blockade areas, and in difficult circumstances, and female workers pregnant or raising children under six years old, were supported with VND500,000/ person.

Nguyen Thi Duyen, a worker of Formostar Garment (Vietnam) Co., Ltd. in Hai Duong city and an F2 case, has been supported by the provincial Confederation of Labor.

The condition of Duyen's family is very difficult. Her husband has cancer, and she is the breadwinner.

"A friend in need is really a friend indeed. The trade union's gift will help my family and I have more money to cover our life. It is also a spiritual encouragement for me to try to overcome difficulties," said Duyen when receiving the gift from the trade union.

To contribute to ensuring stable production and business in all conditions, trade unions at businesses have established Covid Safety teams.

Members of the teams have actively and closely supervised workers' observance of epidemic prevention regulations and asked them to go to work in accordance with the principle "one route, two destinations."

Covid-19 cases once appeared at many businesses in Hai Duong city, forcing hundreds of employees to be off work.

The city Confederation of Labor and grassroots trade unions urgently grasped the mentality of laborers to prevent them from being taken advantage of or incited to stop working or commit illegal acts, thereby encouraging trade-unionists and employees to abide by businesses' regulations, take samples, and strictly follow the Ministry of Health's 5K rule after returning to work.

In addition, grassroots trade unions also actively mobilized businesses to register for vaccination of their workers in accordance with regulations.

Realizing the provincial authorities' direction of preventing the epidemic and maintaining production at the same time, trade unions at all levels have accompanied Party committees, the government, and enterprises in actively coordinating with appropriate authorities to trace F1 and F2 cases at the businesses and taking many measures to prevent and control the epidemic and restore production and business.

Trade unions at all levels always pay attention to launching the emulation movement "Skilful and creative employees," which is actively responded to by a large number of workers.

12,692 individuals in the province participated in the program "75,000 initiatives to overcome difficulties and develop" launched from March to May 2021 by the Vietnam General Confederation of Labor with 11,420 initiatives, including many initiatives on epidemic prevention and control and innovation of production methods, saving hundreds of billions of dong for businesses each year.

Chairman of the provincial Confederation of Labor Mai Xuan Anh said in the coming time, trade unions at all levels would continue to accompany businesses and workers in realizing the dual goals of epidemic prevention and effective production and business and, at the same time, call for resources to take care of, support, and protect trade-unionists and laborers affected by Covid-19.
MINH NGUYEN