Hai Duong provincial authorities have had many practical activities to care for and support victims of Agent Orange/dioxin. 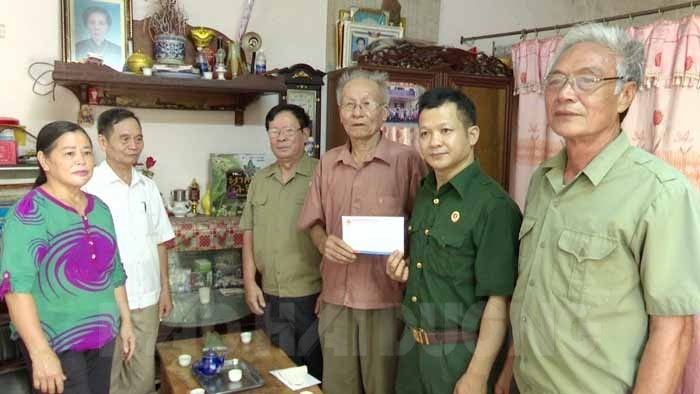 The Association for Victims of Agent Orange/dioxin of Kinh Mon provincial town and the Veterans’ Association of Minh Tan ward present a gift to the family of Vu Tuan Hanh in Tu Lac 2 residential area (file photo)
Marking the 60th anniversary of Agent Orange (AO) disaster in Vietnam (August 10, 1961 – 2021), Associations for Victims of AO/dioxin (AVA) at all levels in Hai Duong province have had many practical activities to care for and support victims.

Joy of being supported

Pham Van Dinh and his wife, AO victims in Van Thai hamlet, Cam Van commune, Cam Giang district, are living in a 4th-grade house built 40 years ago with many leaking and dilapidated parts but cannot afford house repair or construction.

Last July, he was happy to know that he would be given VND50 million from the provincial Fund for the Poor for house construction on the occasion of marking the 60th anniversary of AO disaster in Vietnam.

“Aircraft sprayed AO/dioxin from the sky, pulling a long orange-yellow trail. After such times, many vast forests disappeared, and not a single plant could survive,” said Dinh.

When he returned from the battlefields with a lot of shrapnel in his body, his health was not good. He and his wife have four children, the second of them developed a neurological disease and was hospitalized for up to a month when he was only 2 years old. Since then, he has not been of sound mind like normal people. 43 this year, but he still lives with his parents.

“I intend to build a house this 8th lunar month. After many years living in the dilapidated house, my wife and I will be able to live in a new one thanks to the State’s attention,” said Dinh.

Heartbreakingly, Doi and all of his four children are AO victims, three of them have died while the youngest son is intellectually disabled. Old and weak, Doi and his wife mainly rely on his AO allowance and a few sao (360 m²) of fields.

In the face of these difficulties, the Kinh Mon provincial town AVA has presented Doi’s family with a breeding cow for economic development. This method is suitable to the health situation of Doi and his wife to work for additional income.

“After five years of raising breeding cows, I have returned a calf to the association at higher level for presentation to another household and got an additional economic source from selling calves. Hence, the life of my wife and I is somewhat less difficult,” said Doi. 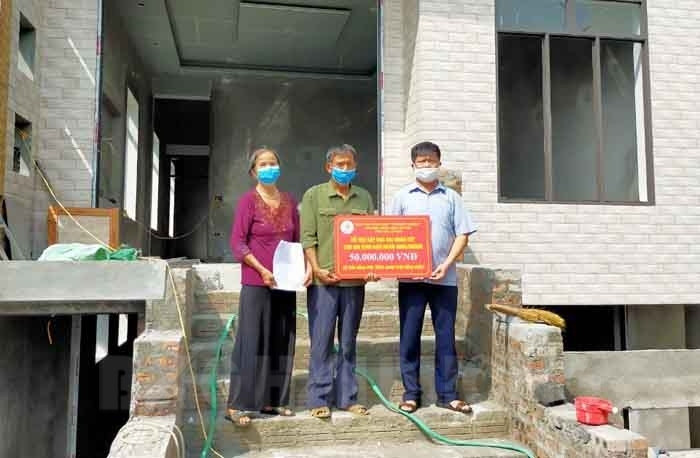 Vu Xuan Thu, Chairman of the provincial Association for Victims of Agent Orange/dioxin (far right) symbolically hands over support money for house construction to the family of member Dao Ba Truyen in Dong Lac ward, Chi Linh city
Do Van Minh, Chairman of the Hai Duong city AVA said the association had mobilized agencies, units, benefactors, etc. to donate about VND100 million to the city Fund for Victims of AO/dioxin.

The city association has jointly conducted a survey, made a list for request, and was allowed to support three families of victims in difficult circumstances with a total of VND150 million for house construction.

The city association is one of typical units in the locality in implementing activities to assist AO/dioxin victims on this occasion.

Because of the complicated Covid-19 situation, commemorative meetings at provincial and district levels were canceled. Nonetheless, associations at all levels still pay attention to implementing other activities like gift presentation, house construction support, and fundraising. Many units have early taken up collections to build Funds for Victims of AO/dioxin like Hai Duong city, Kinh Mon provincial town, and Kim Thanh district associations.

There are 9,266 people infected with AO/dioxin in the province entitled to the State’s allowances, 6,237 of them were directly infected, and the rest indirectly infected as the second generation.

Vu Xuan Thu, Chairman of the provincial AVA, said since launching, its Fund for Victims of AO/dioxin had received more than VND300 million donated by organizations, units, and individuals.

32 households of victims in difficult circumstances in the province have been supported with VND1.6 billion for house construction by superiors.

The association has deducted money from the fund to present 50 gifts (VND500,000 each) to disadvantaged victims.

District, provincial town, and city authorities in the province have also offered thousands of gifts, worth VND100,000 – 500,000 each, to victims.

These are meaningful activities showing the responsibility of Party committees, authorities, and people for generations of victims of AO/dioxin in the province.
VIET QUYNH – THU XUAN