Gia Loc is becoming a hot spot in this epidemic wave in Hai Duong province. The district authorities have promptly taken synchronous measures to suppress the epidemic. 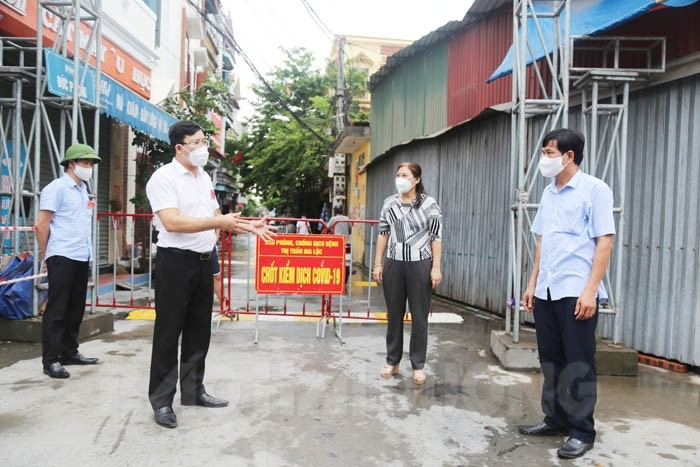 On August 8 morning, Gia Loc district recorded one more SARS-CoV-2 positive case in Gia Loc town who is a worker of Haivina Co., Ltd. Hence, only five days after the first case was detected in this wave, there were up to 24 Covid-19 cases in the district.

All F0 cases are related to an outbreak in Cao Ly hamlet, Gia Khanh commune, where P.V.Q. and his wife P.T.H. (both born in 1992) live. H. used to work for During Vietnam Co., Ltd. in the expanded Dai An industrial zone. Q. is working for Sumidenso Vietnam Co., Ltd.

Secretary of the district Party Committee Dang Xuan Thuong said there is a potential risk of complicated developments of the epidemic because the source of infection has not been identified and some infected people are working for enterprises.

Both H. and Q. were confirmed positive at the same time. V. (Q.’s father) is a restaurant owner having contact with many people, so the possibility that this is the source of infection is not excluded.

Meanwhile, H. had contact with a worker from the same hometown at During Vietnam Co., Ltd. Both of them became F0 cases on the same day.

“During Vietnam Co., Ltd. may also be the source of infection, but it is just a hypothesis. The most important things are hurriedly tracing all people related to F0 cases, localizing outbreaks, and taking samples as quickly as possible as a basis for risk determination and implementation of the most appropriate epidemic suppression measures,” said Thuong.

In the past days, sampling in blockaded areas in Gia Khanh and Gia Luong communes and Gia Loc town helped the district detect some F0 cases.

On August 8, there was only one new infection case in the district, the least in the past five days. It means that the expansion of tracing and testing is the No. 1 weapon at present.

It is expected that on August 9, the local authorities will take samples from about 14,000 high-risk people who are F2 cases currently being isolated at home, their family members, food suppliers, people returning from other provinces, etc. The authorities of communes with a lot of F1 and F2 cases like Hong Hung, Toan Thang, Thong Kenh, and Quang Minh will give priority to expanding testing subjects.

F1 cases have also been strictly managed in concentrated quarantine areas by the district authorities. Special importance is attached to taking care of the life of people in blockaded areas.

“We have arranged forces in and outside blockaded and isolated areas to readily provide foodstuffs to people. Those in need can register with Community Covid teams, we will respond immediately,” said Chairman of the People’s Committee of Gia Khanh commune Nguyen Minh Quan.

Gia Loc district authorities have worked out scenarios to deal with Covid-19 at five levels. Authorities of communes and wards in the district also simultaneously devised plans and prepared human resources and facilities to proactively respond to all situations with 2 – 3 concentrated quarantine sites prepared in each locality.

Since 0 am on August 7, the district authorities have taken higher measures for epidemic prevention and control.

Functional forces from district to grassroots levels have intensified patrolling and monitoring the observance of regulations on epidemic prevention and control and promptly reminded and handled collectives and individuals yet to comply.

Every day, standing members of the district Party Committee in charge of areas and members of the district Party Committee responsible for communes go to the localities assigned to lead and direct the implementation of tasks assigned by their superiors. More than 800 Community Covid teams in hamlets and residential areas are continuously operating.

Gia Loc authorities are also actively inspecting the observance of epidemic prevention regulations at businesses in the area, which are required to suspend operations if failing to comply with the regulations.

The district authorities regularly and constantly conduct propaganda to persuade people to calm down, abide by regulations, and unanimously suppress the epidemic.