Vietnam to develop its own satellite

The project using earth observation satellites for prevention and control of climate change and natural calamities has been set among key national projects. 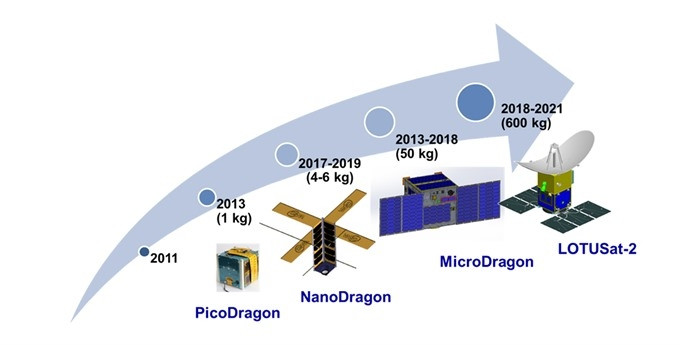 The roadmap of developing earth observation satellites at Vietnam National Space Centre. Photo courtesy of Việt Nam National Space Centre
Vietnam is working to develop its own earth observation satellite, which will help the country manage natural resources and mitigate the impacts of climate change and natural disasters, a conference heard yesterday.

The country was estimated to lose 1.5 per cent of its GDP due to climate change, not including the loss of lives. Thus, the construction and operation of technology facilities to help the country collect data for accurate forecasts of natural disasters were necessary, he said.

Therefore, the project using earth observation satellites for prevention and control of climate change and natural calamities, jointly implemented by the Japanese government and Vietnam, has been set among key national projects.

The project, worth about VND7 trillion (US$301 million), is planned to use official development assistance funds and the State budget from 2011 to 2023. The project was approved by the Government in 2006.

Vu Anh Tuan, deputy head of Vietnam National Space Centre, said the construction of the centre is part of the project, and would be completed by 2019. The centre successfully developed the first PicoDragon Satellite in 2013, which could operate in space for three months. Three other satellites, including NanoDragon, MicroDragon and LOTUSat-1, are currently under development.

LOTUSat-1 is set to be launched next year. The satellite uses radar-tracking technology to give Vietnam the ability to view the entire country and its territorial sea in all weather conditions in high resolution.

According to experts, the country currently has to wait at least two days to get image data on certain areas in the country, but the time would reduce to between six and 12 hours if the country had its own satellite.

Having its own satellite would also give Vietnam image data in case of emergency situations, reducing losses and contributing to a safer life. The image data would be shared among the international community, they said.

Tuan said as many as 36 engineers had been sent to Japan to study satellite technology. They were key staff studying and developing the MicroDragon satellite.

The satellite was set to be launched into space this December, he added.

Vietnam is among the top ten countries in the world most affected by climate change, according to the UN. The country has recorded unusual weather conditions in recent years. Each year, the country suffers loss estimated at $780 million due to public health and environmental problems related to climate change.
Vietnamnews