A spirit of solidarity, national pride, and people’s trust in the Party and State were promoted through the elections. 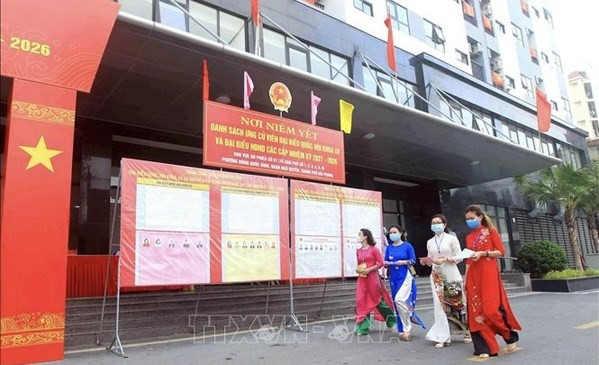 Voters in the northern Hai Phong city go to cast their votes (Photo: VNA)
The elections of deputies to the 15th National Assembly (NA) and People’s Councils at all levels in the 2021-2026 tenure on May 23 were a success, NA General Secretary and Chairman of the NA Office Bui Van Cuong has affirmed.

Speaking to the Vietnam News Agency (VNA), Cuong, who is also a member of the National Election Council (NEC) and head of the NEC Office, said success is shown in the high voter turnout, smooth election activities, strict implementation of pandemic prevention and control measures, guaranteed security, and effective communications.

A spirit of solidarity, national pride, and people’s trust in the Party and State were also promoted through the elections, he said.

He lauded localities’ efforts to overcome the difficulties posed by COVID-19 in organising the elections.

Cuong underlined active and careful preparations, close coordination and a high sense of responsibility among forces engaged in election activities as being major factors contributing to the success.

Most cities and provinces reported high rates of turnout of over 90 percent in the May 23 elections, with some recording a rate of as high as 99.99 percent as of 10pm the same day, reported the NEC. It was one of the major political events in Vietnam this year.
VNA