To create community immunity, the province needs to immunize about 1.4 million people at a cost of VND300 – 560 billion. 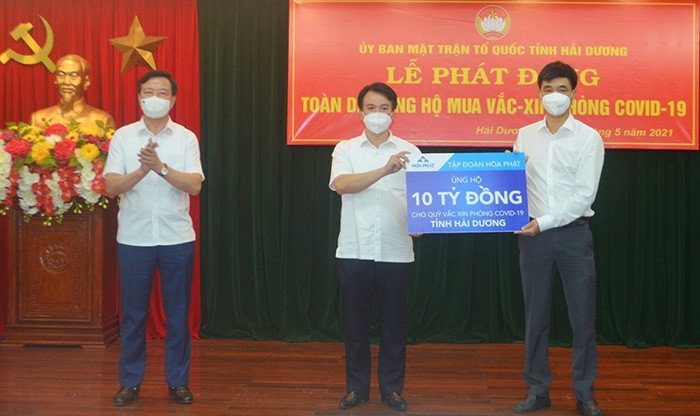 Secretary of the provincial Party Committee Pham Xuan Thang witnesses an enterprise donate money for vaccine purchase
The Party Committee, People’s Council, People’s Committee, and Fatherland Front Committee of Hai Duong province on May 28 morning held a ceremony to mobilize all people to support the purchase of Covid-19 vaccines.

Addressing the ceremony, Secretary of the provincial Party Committee Pham Xuan Thang affirmed that over the part time, Hai Duong had suffered severe hardship in epidemic prevention and control.

Large-scale vaccination is of decisive significance in epidemic prevention and control. To create community immunity, the province needs to immunize about 1.4 million people at a cost of VND300 – 560 billion.

The province is now facing difficulties in resources to buy vaccines; thus, benefactors’ support and participation are really needed. Enterprises should care about participation to vaccinate their employees to ensure a safe working space right at the units.

On behalf of the provincial leaders, the official thanked benefactors for having accompanied the locality in epidemic prevention and control over the past time.

Hai Duong is determined to become one of the first localities of the country creating community immunity from vaccination.

The provincial leaders, representatives of boards and branches, individuals, and enterprises jointly made donations right at the launching ceremony.

After the event, the organizers received more than VND27 billion in donations. Some businesses made great contributions like Hoa Phat Group with VND10 billion, Dai An JSC. and TNG Holdings Vietnam Company with VND5 billion each.

Together with VND43 billion donated earlier by enterprises and entrepreneurs for the province to buy Covid-19 vaccines, by May 28, Hai Duong had raised more than VND70 billion for vaccine purchase.

This is a practical activity of the province in response to the appeal “All people unite and strive for Covid-19 prevention and control” of the Presidium of the Central Committee of the Vietnam Fatherland Front.

On the afternoon of the same day, the provincial Fatherland Front Committee sent a letter calling on all people to support the purchase of Covid-19 vaccines.

The provincial Fatherland Front Committee appealed to agencies, units, organizations, enterprises, and all people in the province to promote unity and unanimity and actively support vaccine purchase for epidemic prevention.

Enterprises should arrange funds to buy vaccines for their managers, experts, and employees, actively assist the province in vaccine purchase, etc.

All donations should be sent to the provincial Fatherland Front Committee’s account 3761.0.1007606.91999 at the Hai Duong State Treasury, 0341000083581 at Hai Duong branch of the Joint Stock Commercial Bank for Foreign Trade of Vietnam, or its office at No. 4 Pham Su Menh, Hai Duong city.
TRUNG MANH