The Vietnamese legislature will make efforts to implement commitments and resolutions to be passed by the 43rd General Assembly of ASEAN Inter-Parliamentary Assembly. 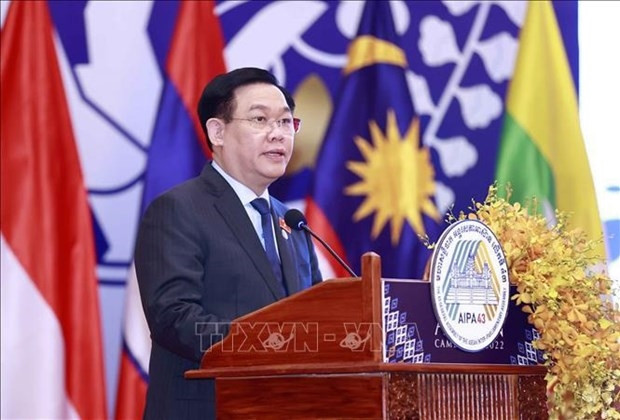 Hue made the affirmation in his speech at the AIPA-43’s first plenary session in Phnom Penh, Cambodia, on November 21.

He stated that the Vietnamese NA appreciates the role of Cambodia as Chair of ASEAN and AIPA this year as well as ASEAN member states’ persistent efforts and determination to jointly respond to challenges for the harmony, peace, and prosperity in the region.

The NA leader held that after 55 years since its establishment and seven years of building the ASEAN Community, ASEAN has made great strides in many aspects, becoming an organisation with an important role for regional peace, stability and security; a vibrant and highly integrated economy; an inclusive, people-oriented and people-centred community; and a trusted partner of countries and organisations regionally and globally.

In such development, member countries’ parliaments have been contributing to building a common legal foundation for the common house of ASEAN, he stated.

He took the occasion to highlight five proposals to AIPA, including strengthening ASEAN's solidarity and centrality in maintaining peace, security and stability in the region. 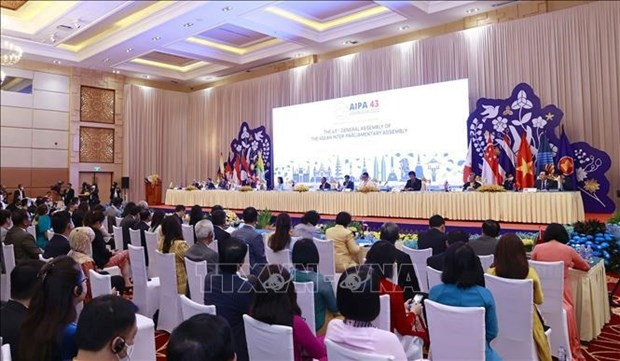 At the event. Photo: VNA
It is necessary to promote the supervision role of member parliaments for the implementation of the ASEAN Blueprints on the political, economic and socio-cultural pillars; the support and coordination among member countries in economic growth, narrowing the development gap, improving people's living standards, and responding to epidemics and climate change, protecting the environment, and ensuring energy and water security.

He stressed the importance of further consolidating and renovating the organisation and operation of AIPA, and fortifying the coordination and relationship between the legislative and executive channels of regional countries, especially in taking advantage of opportunities and mitigating risks in the field of digital transformation and just energy transition.

He took the occasion to express his wish for member countries’ and partners’ support for and participation in the Inter-Parliamentary Union (IPU) Global Conference of Young Parliamentarians that Vietnam will host next year.

At the session, participants agreed that challenges facing the region and the world such as conflicts, epidemics, and climate change, require joint efforts of the international community and parties involved to closely cooperate, comply with international law, join peaceful dialogues, and make responsible acts.
VNA