President Nguyen Xuan Phuc has affirmed that Vietnam always stands united with and supports fraternal relations with Cuba amid complicated developments in the world. 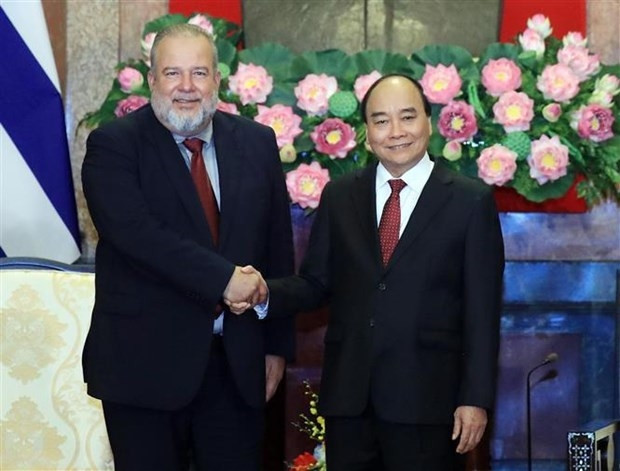 He also hailed the results of talks between the two prime ministers, which he said will contribute to consolidating bilateral ties.

He expressed readiness to learn from Vietnam’s experience in socio-economic development and global integration, as well as its response to global economic challenges.

The two leaders expressed determination to further deepen the exemplary Vietnam-Cuba relationship founded by late Presidents Ho Chi Minh and Fidel Castro and nurtured by generations of the two countries’ leaders and people, and agreed to intensify the education of young generations in the Vietnam-Cuba special friendship.

They reached a consensus on promoting economic, trade and investment ties to be commensurate with the two countries' fine political relations, with a focus on agriculture, healthcare, finance-banking, and science-technology. They will also continue with consultations and mutual support at international organisations and multilateral forums, especially the United Nations and the Non-Aligned Movement.

Cuba always highly values the solidarity and sincere support that the Vietnamese Party, State and people have offered to the Cuban people, particularly in rice supply and food production, Cruz said.

He noted that the two countries will hold important activities marking the 50th anniversary of Gen. Fidel Castro’s historic visit to Vietnam's southern liberation zone and the 40th anniversary of the Vietnam - Cuba Treaty of Friendship and Cooperation this year.

Cruz expressed his belief that the close fraternal ties between Vietnam and Cuba will enter a new development period, for the benefit of the two peoples and for peace, stability, cooperation and development in the two regions and the world.
VNS