The first draft of the project reflects a strategic vision in national development towards a strong nation with wealthy people and a democratic, fair and civilised society. 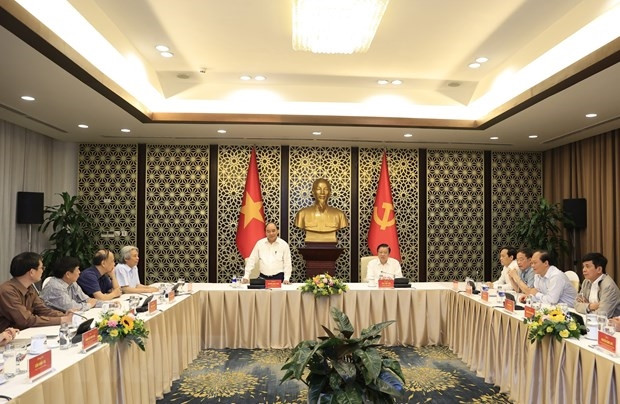 President Nguyen Xuan Phuc (standing) speaks at the meeting. Photo: VNA
Representatives from ministries and agencies, experts and scientists contributed their opinions to the first draft of the project to build a strategy for building and perfecting a rule-of-law socialist State till 2030 with orientations to 2045 at a meeting on April 18.

Speaking at the second meeting of the steering committee for developing the project in Ha Noi, President Nguyen Xuan Phuc stressed that many seminars have been held over the past time to collect feedback.

The President, who is also head of the steering committee, said the first draft has been built on the basis of Marxism-Leninism and Ho Chi Minh's Thought, as well as viewpoints and policies of the Party and the State, and principles, identities, targets and views of the rule-of-law socialist State as mentioned in the 2011 Political Platform, the 2013 Constitution and resolutions adopted by the Party Central Committee.

It reflects a strategic vision in national development towards a strong nation with wealthy people and a democratic, fair and civilised society, where human rights, citizens’ rights and democracy continue to be promoted, the State leader said.

He ordered more attention to be paid to major matters, including people’s right to self-mastery, and agreed with the proposal to organise more seminars to collect opinions from  organisations and individuals.

The steering committee should carry forward their sense of responsibility to ensure the quality and progress of the document, he said, emphasising the need to step up the communication work to raise public awareness of the project.
VNA