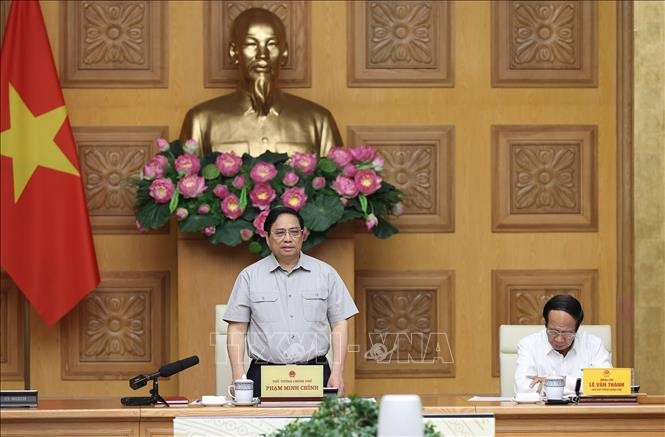 PM Pham Minh Chinh speaks at the urgent meeting on September 27 (Photo: VNA)
The meeting was connected via video conference to administrations of eight provinces and city, 88 district-level localities, and 1,155 communes and wards in the central and Central Highlands regions predicted to be affected by the storm.

PM Chinh said Noru, the fourth storm to appear in the East Sea this year, is heading towards the central region, noting that he issued an official dispatch on September 25 to urge response to the typhoon.

Apart from strong winds, the typhoon will bring heavy rains along, so it is also important to cope with post-storm landslides and floods, he added.

At 4am on September 27, Noru had its eye in the southeast of Vietnam's Hoang Sa (Paracel) archipelago and sustained winds of up to 150 - 166km per hour, according to the National Centre for Hydro-Meteorological Forecasting. 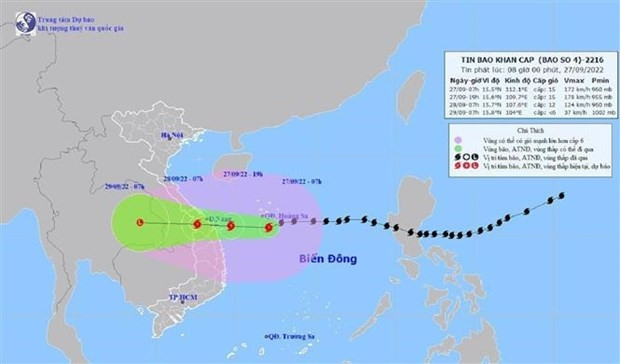 The predicted path of Typhoon Noru (Source: VNA)
It is predicted to move mainly westwards in the next 12 hours, at a speed of 20 -25km per hour, and continue to intensify. At 4pm on September 27, its centre is about 300km to the east of Da Nang, 250km from Quang Nam, and 240km from Quang Ngai. The strongest winds at that time are likely to reach about 150 - 183km per hour.

In the following 12 - 24 hours, the typhoon will continue moving mainly westwards at some 20 - 25km per hour. Its centre will be on the waters near the coast of the provinces from Quang Tri to Binh Binh at 4am on September 28, when the strongest winds will be around 150 - 166km per hour.

To deal with the coming storm, the director of the aviation authority for the central region has decided to temporarily shut airports in this region.

Therefore, flights to and from those airports during the time will be delayed.