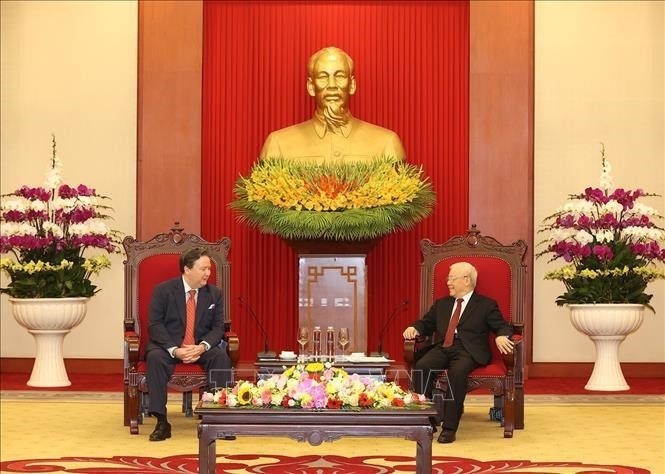 Party General Secretary Nguyen Phu Trong (R) receives US Ambassador Marc E. Knapper on April 25. Photo: VNA
Expressing his honour to return to work in Vietnam as US Ambassador, Knapper said he is impressed with the country’s development achievements and growing stature in the world, as well as the recent strides in bilateral links in multiple spheres.

The two countries hold much potential for further developing their ties in the time ahead, including in new areas such as climate change and epidemic response, he noted.

The US supports a strong, independent, and prosperous Vietnam and will promote bilateral relations on the basis of respect for each other’s political regimes, the ambassador affirmed, pledging efforts to contribute to the countries’ cooperation.

General Secretary Trong congratulated Knapper on assuming his duty in Vietnam, saying that the fortune, strength, and international stature and prestige Vietnam has today are firstly attributed to its clear-sighted foreign policy.

He underlined the foreign policy of independence, self-reliance, peace, cooperation and development, and diversification and multilateralisation of foreign relations on the basis of mutual respect, for the sake of the two countries and for regional and global peace, friendship, and cooperation.

The Party leader asked Ambassador Knapper to continue actively contributing to the development of the two countries’ ties. He also wished his guest many successes during his term in Vietnam.
VNA