President Nguyen Xuan Phuc met with Japanese Emperor Naruhito in Tokyo on Wednesday, part of his stay in the country to attend the state funeral for former Prime Minister Abe Shinzo. 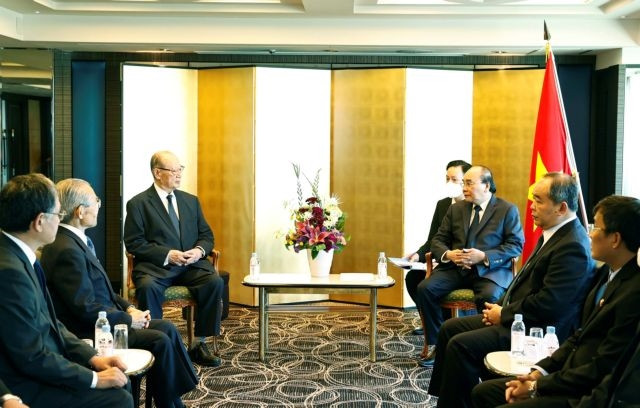 President Nguyen Xuan Phuc meets President of the International Friendship Exchange Council (FEC) of Japan Matsuzawa Ken
The Vietnamese leader expressed his deep condolences over the death of Abe, highlighting the former PM’s special sentiment, dedication, and efforts to promote the countries’ friendship, especially the upgrade of bilateral ties to the Extensive Strategic Partnership for Peace and Prosperity in Asia in 2014, which Phuc described as a precious heritage needing to be upheld and promoted.

He highly valued the vigorous, comprehensive, and substantive development of the extensive strategic partnership in all fields, increased people-to-people exchanges, and mutual assistance in trying times, especially amid the COVID-19 pandemic.

President Phuc appreciated support from Japan, which was the first country to donate COVID-19 vaccines and medical supplies to Vietnam to help with the pandemic response.

He also extended an invitation from Party General Secretary Nguyen Phu Trong and himself to the Japanese Emperor and Empress to visit Vietnam on the occasion of the 50th anniversary of diplomatic ties in 2023. He held that the visit will hold significant importance to the countries’ relations.

Expressing his delight at the thriving relations, Emperor Naruhito affirmed that he attaches great importance to the Vietnam – Japan friendship and will do his utmost to contribute to bilateral ties.

He also underlined the importance of enhancing mutual trust and understanding between the two peoples through cultural and people-to-people exchanges, particularly in the year marking the 50th anniversary of diplomatic relations.

Highly appreciating the late PM's efforts for the development of Japan and the happiness of the Japanese people, Phuc affirmed that Abe was loved by many international friends, including Vietnamese people.

He said he treasures the special affection and contributions of Abe and his wife toward the Vietnam – Japan cooperation relationship.

Abe Akie said she will continue to pay attention to and support the further development of the countries’ ties.

The guests affirmed that they will continue to support and promote cooperation between the nations’ parliaments, the exchange of their parliamentarians and young leaders; promote the bilateral collaboration in economy-trade, ODA, and labour; and come up with policies in support of Vietnamese interns and workers in Japan.

In another meeting, former Japanese Ambassadors to Vietnam pledged to become a “bridge” via proposing many initiatives to promote the two countries’ extensive strategic partnership to be on par with their potential and meet the aspirations of their peoples.

Matsuzawa affirmed that FEC is determined to contribute to deepening the countries’ relations and people-to-people exchanges.

Phuc also received governors of Japanese prefectures Gunma, Tochigi and Kanagawa, who highlighted a series of priorities in their cooperation with Vietnamese localities.
VNS