President Nguyen Xuan Phuc on July 20 chaired a scientific symposium on theoretical and practical issues related to national protection in the new situation. 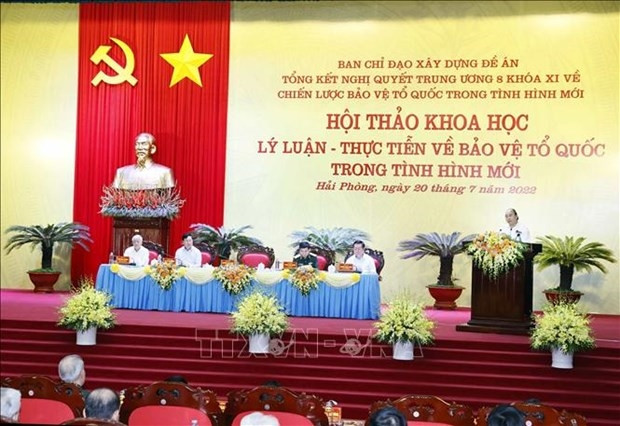 President Nguyen Xuan Phuc addresses the event (Photo: VNA)
The event aimed to seek valuable scientific foundations for policies of the Party and State in order to firmly protect the Socialist Vietnamese Fatherland in the new situation. The event’s organisers received more than 50 reports with rich scientific contents.

President Phuc, who is head of the steering committee for building a scheme to review the 10-year implementation of the Party's resolution on the national defence strategy in the new situation, highlighted the significance of the resolution, and underlined the goals, viewpoints and orientations guiding tasks and solutions for national protection.

He affirmed that in the new historical period, the country has made inclusive achievements in maintaining independence, national sovereignty, territorial integrity and socialism orientation, as well as the leadership of the Party and the State management, ensuring a peaceful and stable environment and security for national development.

The President underlined the significance of promoting the national great unity as well as the role of the Party as the leading factor deciding the success of the Vietnamese revolution.

He pointed out the need to build a strong and incorruptible political system and reinforce and strengthen the national great unity bloc as well as the promotion of national strengths in all fields.

The President asked media agencies to continue to help raise public awareness of the responsibility to protect the nation and inspire patriotism and a revolutionary spirit among the community, especially youngsters.

Earlier the same day, on the occasion of the 75th anniversary of War Invalids and Martyrs Day, President Phuc and delegates offered incense and flowers to heroic martyrs at the Heroic Martyr Monument in Hai Phong city, and to President Ho Chi Minh at the late leader’s statue in the city.
VNA