The strategic partnership between the UK and Vietnam is solid but there is plenty of room for it to expand.

National Assembly Chairman Vuong Dinh Hue pays an official visit to the United Kingdom of Great Britain and Northern Ireland from June 28-30 (Photo: VNA)
Chairman of the National Assembly Vuong Dinh Hue’s official visit to the UK from June 28-30 presents a great opportunity for the two countries to strengthen their relations in legislative and reform issues that will support Vietnam’s development in the coming years, UK Ambassador to Vietnam Gareth Ward has affirmed.

Talking to the press, he said there are three main areas for such cooperation, namely digitalisation, simplification of rules and procedures to strengthen the business environment; supporting equality, gender equality and equality for minority groups; and legislation and regulation around the green economy.

He stressed that the strategic partnership between the UK and Vietnam is solid but there is plenty of room for it to expand.

Hue’s visit, the second of a senior Vietnamese leader to the UK within the past year, will help to push forward the cooperation between the two parliaments and governments, he said. 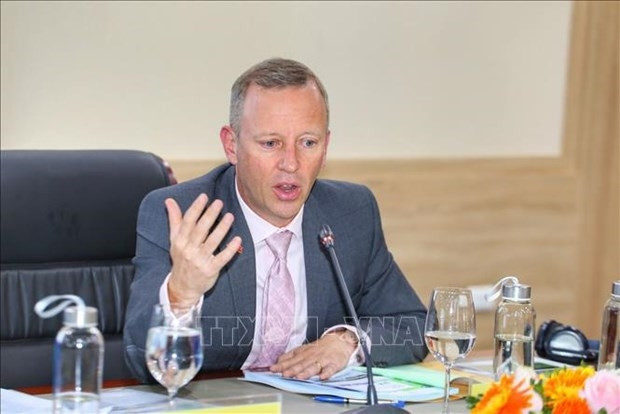 UK Ambassador to Vietnam Gareth Ward (Photo: VNA)
"The relationship between the UK and Vietnam is built on people-to-people links. So I think this visit is a good symbol that we are open for business again in both directions,” said Ward.

Businesses can travel, invest and develop export and import, while students from Vietnam can come to the UK and vice versa, he added.

“We hope that we will soon see the return to the high level of tourism between our two countries.”

One of the key elements of Chairman Hue’s trip to the UK is to strengthen financial flows into Vietnam’s green economy, the diplomat said.