Hai Duong authorities will create the most favorable conditions for enterprises and people from the Republic of Korea to live and work in the province. 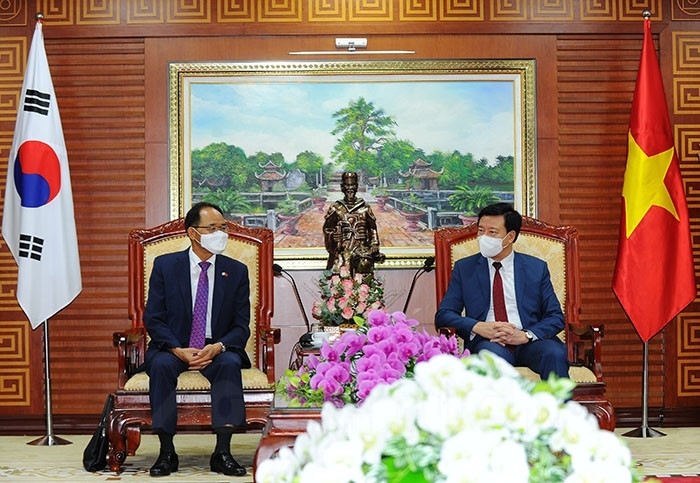 At the meeting, the provincial leaders briefly introduced a plan for the province's key industrial region in Binh Giang and Thanh Mien districts to the RoK Embassy's delegation.

The province's key industrial region is large and has a favorable location, abundant laborers, and synchronous infrastructure, very convenient for investors, including RoK enterprises investing in hi-tech and supporting industrial projects.

The provincial leaders hold talks with the delegation of the Republic of Korea Embassy in Vietnam
The Secretary of the provincial Party Committee desired that Mr. Park Noh-wan would introduce the potential and strengths of Hai Duong and its dynamic industrial region for the RoK business community to study and invest in Hai Duong.

Hai Duong authorities will create the most favorable conditions for RoK enterprises and people to live and work there.

The RoK Embassy in Vietnam is willing to act as a bridge between Hai Duong province and RoK enterprises to lure more and more capable businesses suitable to Hai Duong's development orientation to invest in the province.

Mr. Park Noh-wan proposed that the provincial authorities continue to create favorable conditions for LH Corporation to invest in Dai Hung industrial, urban, and service complex project with a scale of 304 ha and a total investment of nearly USD500 million in Dai Son commune, Tu Ky district, and other projects that RoK and Vietnamese Governments are cooperating on and implementing in Hai Duong.