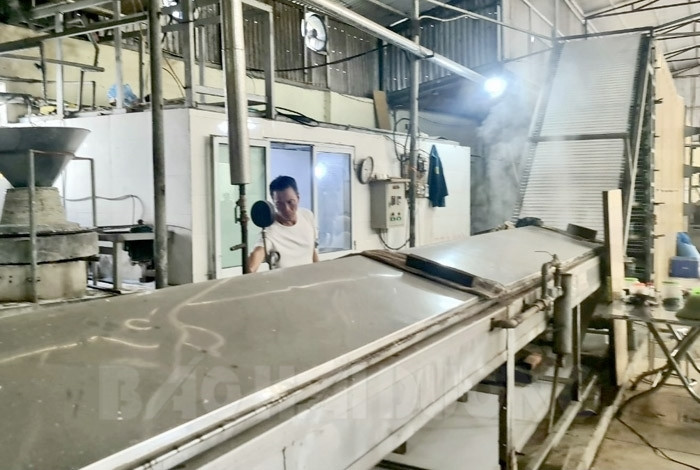 Investment in modern machinery in producing Hoi Yen dried rice noodles helps to improve the productivity and quality of products and limit environmental pollution
The making of dried rice noodles in Hoi Yen hamlet has existed for a long time with about 200 households in the business, and the locality was officially recognized as a traditional craft village in 2004.

At present, the number of households doing the job is not as large as before, but the output is higher with better quality.

Hoi Yen dried rice noodles have been available in many provinces and cities throughout the country and exported.

The result was achieved thanks to changes of local people and authorities in thinking and working style.

According to Hoi Yen residents, about 20 years ago, all households made dried rice noodles manually. Every step, from kneading dough to cooking, drying, and slicing noodles, was done by hand.

People used coal to burn ovens to cook rice noodles. Wastewater in households was not treated but discharged directly into ponds, lakes, and sewers. Therefore, the very unpleasant smells of burnt coal and sour rice water could be sensed right from the entrance of the village.

Rice noodles were put in abundance on roads and alleys in the hamlet to air but productivity at that time was low, only about 1 – 2 tons/day.

To improve the environment and productivity of the craft village, many households invested in machinery and equipment together to make dried rice noodles. Instead of one family doing all steps, the households gradually associated with each other to professionalize each dried rice noodle making step to heighten production efficiency.

In the past five years, two families in Hoi Yen hamlet have invested in continuous dried rice noodle making systems, helping to protect the craft village's environment, increasing the productivity and quality of dried rice noodles, and creating jobs for dozens of other workers in the locality.

Thuoc said it was very strenuous to do the job in the past, as the whole family of 5 – 6 people had to get up at 3 am and work until 10 pm to produce only about 2 quintals of noodles. Each day, Thuoc's family had to use about 20 kg of coal to burn ovens to cook noodles.

Since investment in modern machinery, his family has produced about 4 tons of rice noodles each day. Currently, his family is providing jobs for nearly 30 local laborers with per capita income of 7 – 15 million VND/month.

"The machine system can replace about 20 manual production households. Investment in machinery also led to a change in fuel from coal to electricity and firewood," said Thuoc.

"My family has invested in a system of high quality biogas cellars to treat wastewater generated during production.

"Investment in technology in production has contributed to reducing the amount of emissions and wastewater discharged into the environment."

The continuous drying and slicing process helps to ensure the quality of dried rice noodles.

His family's Q5 dried rice noodles were recognized as three-star OCOP products in 2020 by the provincial authorities and have been exported to Finland and the Czech Republic.