Afforestation on An Phu mountains

An Phu mountains and forest in Kinh Mon provincial town are impressive thanks to layers of verdant trees embracing Cao An Phu temple relic. 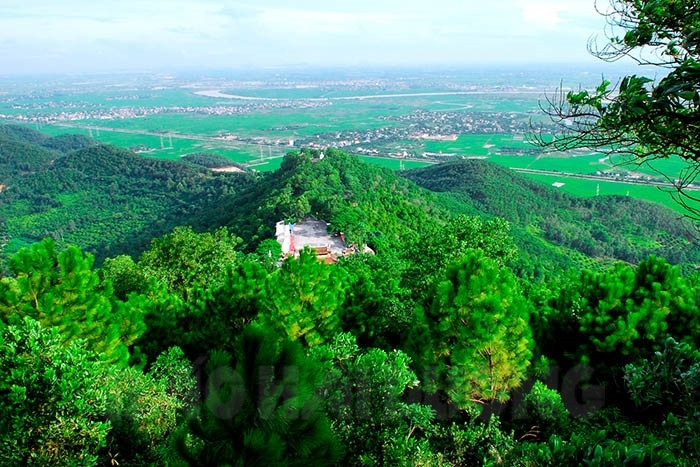 After nearly 30 years of planting and care, verdant An Phu mountains and forest have revived
Nearly 30 years ago, this place was just a rocky mountainous area...

In the memory of Nguyen Kim Thich in residential area Kim Xuyen, An Sinh ward, Kinh Mon provincial town, in the early 1990s, An Phu mountain range to the west of Kinh Mon town was barren with rough stumps of cut down trees, exposing arid rocky soil.

People burnt and chop down trees to get charcoal, and then temporarily planted potatoes and cassava to mark time.

Cao An Phu temple relic site was sacred and majestic, but the landscape was desolate and lifeless.

Program 327 on greening barren land and hills launched by the State in 1992 brought a breath of fresh air, gradually changing the awareness and actions of local people.

An Phu mountain range had a length of about 17 km but fragmented trees, making many people afraid of land and forest allocation. However, seeing the forest get depleted day by day, local households were more and more determined to restore trees and bring back green to mountains and hills.

Nearly 30 years of working for the Kinh Mon Forest Management Station are also the years Nguyen Huu Thu has been attached to An Phu mountains and forest.

He said in 1995, when 20 ha of acacia, pine, and ironwood trees started to be planted near Cao temple, those living near the forest were given priority to get contracts, he was also eager to do. Therefore, in just two years, green sprouts covered the entire 1,000 ha of An Phu forest land.

Each of nearly 600 contracted households had their own way, but all of them were devoted to forest trees. To date, An Phu mountains and forest have revived thanks to their great efforts.

The forest is no longer natural, but under human hands, An Phu mountains and forest were strongly revitalized.

Not only playing an ecological role, the forest also has much value in association with Cao An Phu temple. The revived An Phu forest looks like a new coat of the relic. Each individual plant there seems to carry the soul of history, a testament to the everlasting strength of the nation.

Aside from afforestation, An Phu botanical garden has also been built to preserve precious genes. Dozens of thousands of plants from all regions have been gathered there, making this common botanical house diverse and abundant.

Nguyen Van Thu, Head of the Management Board of Cao An Phu Temple Relic, said the mountains and forest are privileges of nature and associated with the relic, so they must be respected and preserved even more.

Aware of this, the Management Board has never neglected forest protection and care. 15 members of the board’s forest fire prevention and fighting team not only jointly prevent and fight forest fires but also actively mobilize tourists to raise awareness during sightseeing and worshipping at the relic so as not to let forest fires occur.

An Phu forest is not high but slightly sloping and associated with the relic, thus luring a large number of visitors. Nonetheless, the households looking after the forest always insist that it is difficult for strangers to break in and explore the forest freely since they guard it very carefully. Forest fires are extinguished right after happening because the people are always on their guard. An Phu forest was revived thanks to local people’s efforts and will.
NGUYEN DO