The Vietnamese Government and the Government of the United Kingdom of Great Britain and Northern Ireland on November 21 signed a memorandum of understanding on anti-human trafficking cooperation. 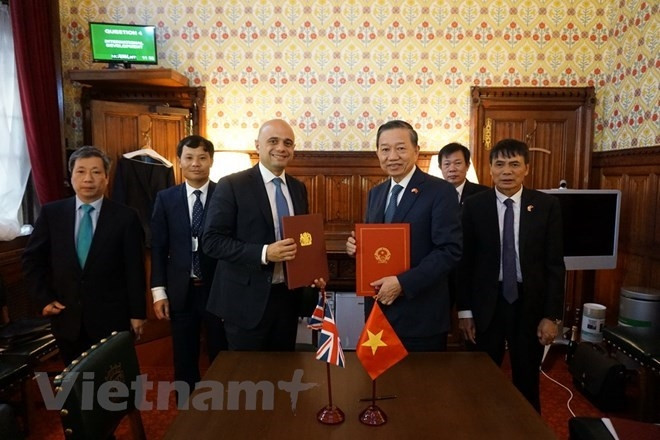 Welcoming the delegation of the Ministry of Public Security, Javid appreciated the outcomes of the two ministries’ cooperation over the past years, especially in the fight against organised and trans-nation crimes, human trafficking crime, and criminals using high technology.

Lam affirmed that the Vietnamese Government pays attention to developing its relations with the UK and considers it one of the priorities in its foreign policy for peace, cooperation and development.

In September 2010, the two countries signed a joint statement on the establishment of a Strategic Partnership, in which diplomacy, security and defence are the three main pillars, Lam stated, adding that Vietnam appreciates the results of comprehensive collaboration, especially in diplomacy, security, defence, economics, trade, culture, health, education and training, environment and climate change response.

During the talks, both sides assessed that the two ministries have coordinated closely in combating crimes, thus helping safeguard the national security and social safety and order.

To increase the effectiveness of bilateral cooperation, both sides agreed to maintain all-level delegation exchanges, share information and experience in human trafficking prevention and control, including in investigation, chase for and handover of traffickers, and rescue, protection and repatriation of victims.

The two sides will also speed up negotiations towards the signing of an agreement of extradition of convicts and other cooperative agreements.

Earlier on November 20, Minister To Lam visited the Vietnamese Embassy in the UK.
Vietnam+