Prime Minister Nguyen Xuan Phuc on November 7 conveyed his profound condolences to families of the 39 victims found dead in a container truck in the UK. 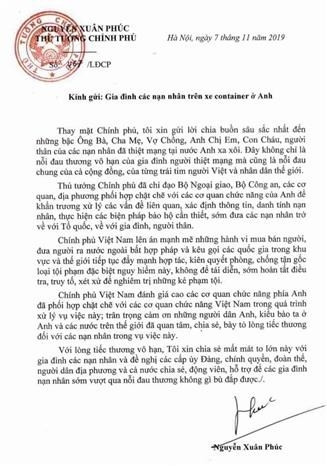 The PM's message of condolences (Photo: VNA)
“This is the pain of not only the victims’ families but also the entire community and of each Vietnamese and people around the world,” he wrote in the message.

The PM directed the Foreign Ministry, Ministry of Public Security, agencies and localities to work closely with the UK authorities to quickly handle issues related to the case and take necessary citizen protection measures, thus bringing the victims home early.

He said the Vietnamese government strongly condemns human trafficking activities and the illegal transport of people abroad. Vietnam calls on countries in the region and the world to continue strengthening cooperation to prevent and crack down on this type of crime, prevent similar occurrences, and early conclude investigation to punish offenders.

The Vietnamese government appreciates the close coordination of the UK authorities during the process of handling the case, he said. He also thanked the UK people, the overseas Vietnamese in the UK and the world for expressing sympathy for the victims.

The Government leader also urged all-level Party committees, administrations, mass organisations and people in localities and nationwide to encourage and help the victims’ families to overcome the immense grief.

On late November 7, the Vietnamese Ministry of Public Security and UK police affirmed that all 39 victims found dead in a container truck in Essex, the northeast of London, UK on October 23, are Vietnamese.