Party and State leaders have presented gifts to poor people and workers across the country ahead of Lunar New Year (Tet) festival which lasts from February 2-10 this year. 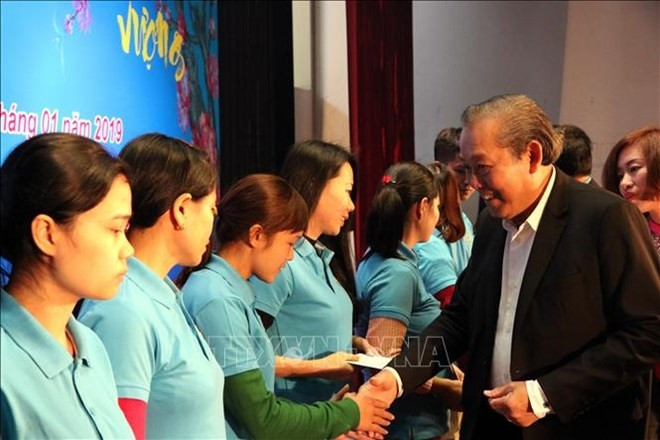 Vuong and his entourage visited a resettlement area in Lung hamlet, Phong Du Thuong commune, which was hard hit by torrential rains and floods in July 2018.

On this occasion, the Joint Stock Commercial Bank for Foreign Trade of Vietnam (Vietcombank) handed over 6 billion VND (258,000 USD) to Van Chan and Van Yen districts to build schools in disadvantaged communes.

Addressing a year-end gathering held for 410 underprivileged workers in Hai Duong by the Vietnam General Confederation of Labour the same day, Binh expressed his hope that after the holiday, the workers will work harder to complete their tasks, contributing to the development of businesses, Hai Duong and the country at large.

On this occasion, Binh visited the family of a worker of the Hai Duong Urban Environment JSC, who is facing difficult circumstances.

She was accompanied by representatives of the Vietnam Fatherland Front (VFF) Central Committee, the Vietnam Red Cross Society (VRCS) and the National Fund for Vietnamese Children under the Ministry of Labour, Invalids and Social Affairs.

On this occasion, the provincial Department of Labour, Invalids and Social Affairs and chapters of the VFF and VRCS in Lam Dong presented 250 gift packages to local disadvantaged people.

The same day, Vice President Dang Thi Ngoc Thinh visited and presented gifts to patients at the Hanoi Oncology Hospital as part of the “Supportive fund for cancer patients – bright future” which will also organise buses to bring the patients home for Tet reunion from January 25-30.
Vietnam+