Due to the impact of Covid-19, there have been many changes in this year’s Vu Lan festival (a Buddhist festival dedicated to filial duty). 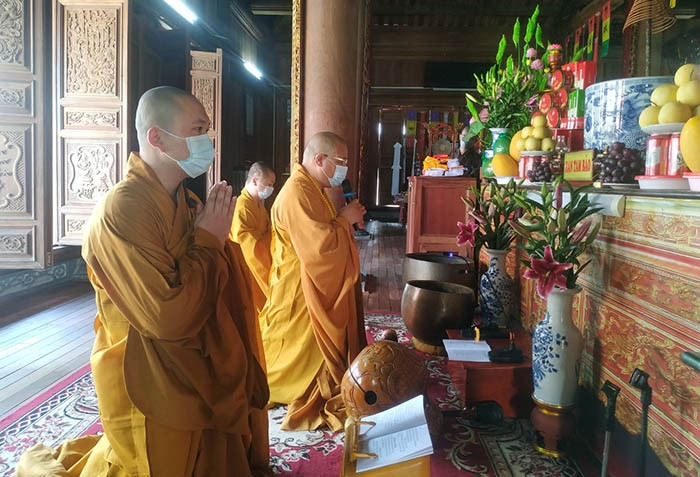 This year’s Vu Lan festival, only internal ceremonies are held at Dong Cao pagoda in Hai Duong city
Each place and each person has a different way to turn to their origin and express their heart for their parents.

“I set up a simple and compact offering tray and reduced unnecessary expenses. A relative reunion is also delayed until the epidemic situation is stabilized,” said Kieu Anh.

“It is not necessary to make a large feast or gather for a buster to fulfill our filial duty and commemorate our ancestors. Living in harmony and joy among family members is the best way to show gratitude to our parents,” said Phuong.

Therefore, this year’s Vu Lan festival, taking advantage of the summer vacation, Phuong helped her children learn about the meaning of the festival to better understand filial piety.

Living in a blockaded area in Gia Khanh commune, Gia Loc district, so this year, Nguyen Thi Huong cannot take her children to her hometown of Thai Binh to celebrate the 7th full-moon festival as in previous years.

“I often call to ask about my parents' health. I think, people must fulfill their filial duty frequently, not only at Vu Lan festival,” said Huong.

At previous Vu Lan festivals, a requiem and a night festival with flower garlands and colored lanterns were often organized at Dong Xuyen pagoda in Cam Hung commune, Cam Giang district, attracting hundreds of Buddhists and visitors. This year, because of the epidemic, these ceremonies are not held.

Many years ago, Dong Cao pagoda in Tan Hung ward, Hai Duong city, lured hundreds of people to every Vu Lan ceremony. There, a rose wearing rite was solemnly and methodically held. This year, the ceremony was internally organized to limit large gatherings.

Right from the beginning of the 7th lunar month, the pagoda guided Buddhists on registering their information by phone, text message, or email to make a praying list. Buddhists did not go to the pagoda but watched the livestreamed ceremony on the Facebook account Hai Duong Buddhism.

According to Superior Monk Thich Thanh Van, Member of the Executive Council of the Vietnam Buddhist Sangha, Head of the Executive Board of the provincial Buddhist Sangha, the Buddha taught gratitude and commemoration in mind instead of where and how to show it. The most important thing is sincerity. These days, descendants remember their ancestors, family traditions, and good manners of the ancestors to follow well.

This year, due to the impact of Covid-19, the Executive Board of the provincial Buddhist Sangha has required pagodas to avoid large gatherings and encouraged online organization of Vu Lan ceremonies.

The Executive Board of the provincial Buddhist Sangha also called on monks, nuns, and Buddhists to comply with epidemic prevention regulations. Families should not gather in large numbers when holding ceremonies.

In addition, the Executive Board of the provincial Buddhist Sangha appealed to Buddhists to actively contribute to the Covid-19 Vaccine Fund and present gifts and necessities to blockaded areas and disadvantaged people affected by Covid-19.
QUYNH ANH