Numerous values have still been preserved at Con Son – Kiep Bac, specifically contributing to proving the existence and development of Dai Viet civilization through periods of time. 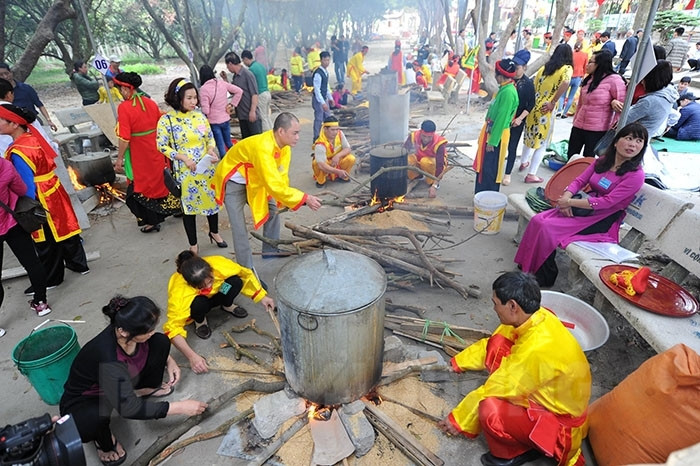 If being recognized as part of the world heritage, Yen Tu relic and landscape complex (including Con Son – Kiep Bac relic site and Thanh Mai pagoda in Hai Duong) will be upgraded to an international level and increasingly attractive to visitors.

Recently, a group of experts from the Vietnam Archaeological Association has surveyed relics in Hai Duong to supplement materials for the preparation and submission of a scientific dossier to the UNESCO for recognition of Yen Tu relic and landscape complex as part of the world heritage. There, the group appreciated Hai Duong authorities for actively accompanying the authorities of Quang Ninh and Bac Giang provinces to make the dossier.

He also hailed the Management Board of Con Son – Kiep Bac Relics for paying attention to archeology and preservation of artifacts which had become factual foundations serving the dossier making.

In fact, many researchers have so far pointed out that Con Son – Kiep Bac relic site is an integral link in the heritage system of Truc Lam Buddhism.

Among the first worshipping and contemplating places of Truc Lam Zen in the Northeastern bow, Con Son – Kiep Bac relic site is indispensable.

The relic site is considered as a bridge between Thang Long capital and Truc Lam Buddhist Sanctuary, from which Truc Lam Zen developed and widely spread.

At present, many pagodas, temples, towers, and valuable and rare antiques bearing spiritual and ideological value of Truc Lam Zen are still being kept at Con Son – Kiep Bac and in related relic systems.

At Con Son – Kiep Bac, the first thing to mention is the vestige of Dang Minh stupa which contains the relics of Huyen Quang, the 3rd patriarch of Truc Lam Zen, at Con Son pagoda. Next are epitaphs, tomb towers, temples, palaces, etc.

Especially, systems of stele inscriptions in Thanh Hu cave and epitaphs at Con Son pagoda date from the Restored Le era in the 17th and 18th centuries. They prove that Truc Lam Zen was not lost but revived more strongly in the following centuries.

According to historical books, Con Son pagoda, built in the 13th century, was the place where 1st patriarch Tran Nhan Tong trained monks and nuns and developed the religion. In 1329, 2nd patriarch Phap Loa constructed and enlarged the landscape of Con Son. In 1330, 3rd patriarch Huyen Quang came to lead, train monks and nuns, and develop Truc Lam Zen.

Meanwhile, Kiep Bac temple was built in the Tran dynasty to worship National Hero Tran Hung Dao, who led the Tran dynasty's army and people to defeat Mongol-Yuan invaders in the 13th century.

Among 10 criteria of the UNESCO, the dossier making consultants are targeting four criteria, focusing on elements containing a distinct demonstration of an outstanding cultural and religious tradition that Con Son – Kiep Bac relic site basically meets.

However, there remain difficulties because of objective reasons like social changes and wars, causing most of the relics to be restored or even rebuilt.

At present, a strong point appreciated by the experts is the intangible heritage value clearly shown through the preservation, restoration, and organization of traditional festivals at Con Son – Kiep Bac relic site.

In 2012, the festivals were recognized as part of the national intangible cultural heritage.

It is understandable that there remain difficulties on the road to becoming part of the world heritage, it is clear that over the past more than 700 years, despite many ups and downs of history, numerous values have still been preserved at Con Son – Kiep Bac, specifically contributing to proving the existence and development of Dai Viet civilization through periods of time.