The team is responsible for detecting, preventing, and handling destructive activities affecting the ecosystem of Dao Co, the environmental landscape as well as the security and order of the tourist site. 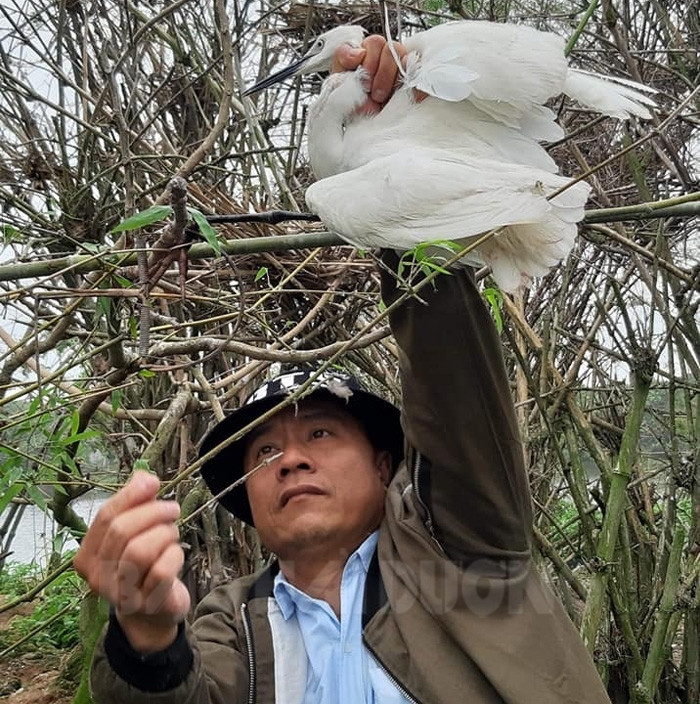 The self-governing team frequently organizes checking to save storks and night herons caught in rat traps
Over the past years, the Security and Order Self-governing Team (SOST) for Dao Co (Stork Island) ecological area in Chi Lang Nam commune, Thanh Mien district has always fulfilled its assigned tasks, contributing to protecting the habitat of storks and night herons there.

In 2014, Dao Co was classified as a national relic by the Ministry of Culture, Sports, and Tourism.

Every year, the site welcomes tens of thousands of visitors. This is also a condition for the arising of such social evils as gambling and theft and environmental pollution.

From that fact, the Chi Lang Nam Commune People's Committee set up the SOST for Dao Co ecological area with 56 members.

The team was divided into three self-governing groups of onshore attendants, boatmen, and guards. The groups are responsible for detecting, preventing, and handling destructive activities affecting the ecosystem of Dao Co, the environmental landscape as well as the security and order of the tourist site.

"Although there is not any financial support, all members still work enthusiastically. Since establishment, we have always followed the motto: Ensuring the safety of visitors, storks, and night herons," said SOST leader Nguyen Duc Vo.

General rules of Dao Co ecotourism area and self-governing and self-defense skills on security and order assurance have been disseminated to the SOST members.

The onshore attendants have fulfilled their commitment to sell proper goods at fair prices and not to scramble for customers.

The boatmen row on schedule, dock in the prescribed places, prepare sufficient life jackets, and neither carry more passengers than stipulated nor invite customers with insistence.

The guards are in charge of coordinating with the staff of the tourist site to manage, look after, and protect property and well prevent and fight fires; introduce visitors the history and culture of the local as well as Dao Co ecotourism site; etc.

"Every night, the team assigns 3 - 4 members to collaborate with the commune police to patrol around islets to promptly detect and prevent those intending to destroy or steal property or hunt storks and night herons," said Ngo Dinh Doan, head of the commune police.

"For five years of operation, the self-governing groups have found and provided hundreds of pieces of valuable news for police forces for timely prevention and arrest.

To protect the habitat of the storks and night herons, the SOST members have strictly observed regulations to preserve Dao Co tourism area such as no hunting and taking of stork and night heron eggs and mobilization of their families and relatives to together protect the birds and natural landscape.

"34 out of 56 members of the team are from families around Dao Co. This is the cadre for the protection of the storks and night herons," said Vu Thi Nu, deputy head of the onshore service group.

"The households weekly clean areas surrounding the lake and have signed a commitment not to throw waste into the environment.

"In 2018, the Provincial People's Committee funded the upgrading of the islets in Dao Co ecotourism area. The households actively donated workdays and land and voluntarily removed hundreds of meters of walls and fences to build walkways around the islets."

During the breeding season, the team is always present on the islets to repair stork nests and pick birdies falling to the ground.

"Since the SOST was formed, security and order in the area have changed positively. There are no more hunting of storks and night herons and theft. Therefore, the number of visitors has significantly increased," said Nguyen Dang Giam, head of the managing unit of Dao Co ecotourism area.

"In the coming time, we hope that authorities at all levels will work out a support policy for the team to have funds to maintain activities."
DO QUYET