The programme has contributed to speeding up the building of the revised Law on Labour, institutionalising views on labour relations, and promoting equal rights between employers and employees. 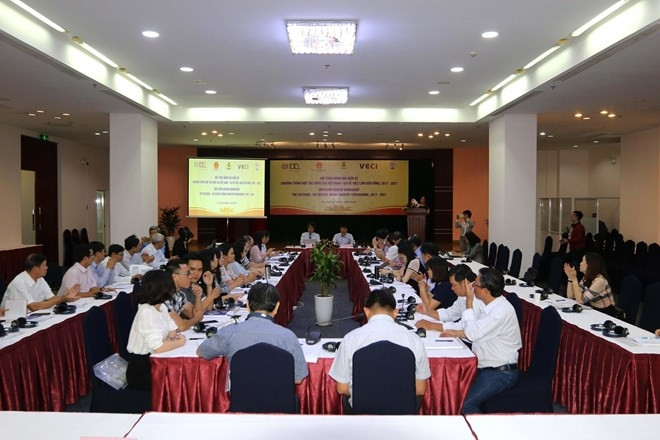 At the workshop (Photo: VNA)
The national cooperation programme signed between Vietnam and the International Labour Organisation (ILO) in December 2017 has created sustainable employment and business opportunities for employees and employers, heard a workshop held in Ho Chi Minh City on July 30.

After two years of implementation, the programme has contributed to speeding up the building of the revised Law on Labour, institutionalising views on labour relations, and promoting equal rights between employers and employees, said Nguyen Manh Cuong, Director of the Department for International Cooperation under the Ministry of Labour, Invalids and Social Affairs.

The programme has also helped increase dialogues and promote democracy and labour creativity as well as improve the framework on building harmonious, stable and progressive relations at the workplace, he added.

It is expected to accelerate the adoption and promulgation of a scheme on reforming social insurance and wage policies, Cuong said.

He noted that this year, Vietnam has joined three important technical conventions of the ILO: Convention 88 on Employment Service, Convention 159 on Vocational Rehabilitation and Employment (Disabled Persons), and Convention 98 on Application of the Principles of the Right to Organise and to Bargain Collectively.

Dr. Dao Quang Vinh from the Institute of Labour Science and Social Affairs said the programme has created better opportunities for sustainable employment and business for both male and female workers, especially those in the vulnerable groups.

Social security has been expanded and deployed to a larger target groups thanks to the programme, he added, citing 31 percent of the labour force in the working age has participated in social insurance and 87.7 percent of the population has joined health insurance.

Chang-Hee Lee, Director of ILO Country Office for Vietnam, said Vietnam is one of the dynamic economies with sustainable growth for many consecutive years.

Vietnam has made revisions to the revised Law on Labour while participating in free trade agreements, which showed the country’s economy has step by step been strengthened and grown strongly, according to the ILO official.

This is the foundation to help Vietnam advance quickly in the process of national industrialisation and modernisation, he added.