Energy sector to go on recruitment drive this year: report

The energy sector is likely to see a sharp increase in hiring during the rest of the year, recruitment company Navigos Group has said in a report released recently. 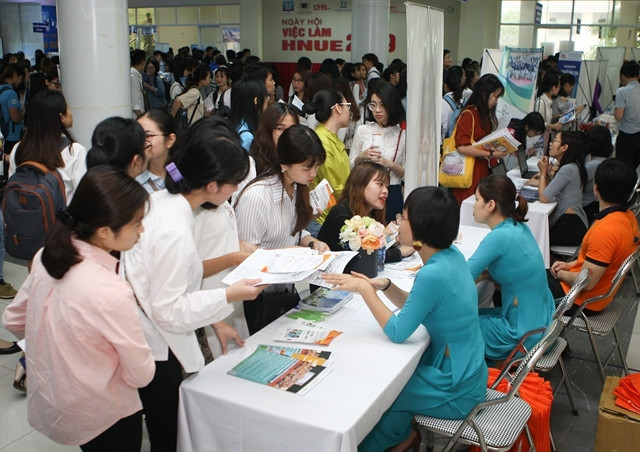 A job fair in Ha Noi. VNA/VNS Photo Thanh Tung
It said in the second quarter there was a big rise in demand for human resources in the wind and solar power segments, and this would continue during the remaining months, mainly in the provinces of Ninh Thuan and Tra Vinh.

It pointed to the EVFTA trade agreement that took effect on August 1, saying Vietnam has attracted the attention of European investors in the field of energy.

Many major projects are in the feasibility study stage while others are seeking solutions to overcome difficulties, and both promise to move quickly in the near future.

Navigos Search also said many foreign experts in the energy sector are approaching HR consulting services and looking for opportunities to work in Vietnam, and Vietnamese engineers working in other countries want to return to Vietnam despite possibly lower incomes.

The report also said that newly established Japanese companies in Vietnam are unable to begin production due to the impact of the COVID-19 pandemic. Many senior experts from Japan, who are to hold key positions in these companies, have not been able to enter Vietnam, leading to delays in recruitment for other positions too, it said.

Amid the difficulty in carrying on business, some Japanese companies have reduced working hours or wages or made other adjustments to their payroll.

Some have, especially due to the difficulties faced by their parent company back home, even closed their factories indefinitely.

Very few have plans to expand, and most are only focused on keeping their personnel and recruiting replacements.

However, it is expected that in the fourth quarter there will be a significant shift in investment from China to Vietnam, which will greatly affect the recruitment needs of businesses.

They will include many Japanese investors, who will move their factories.