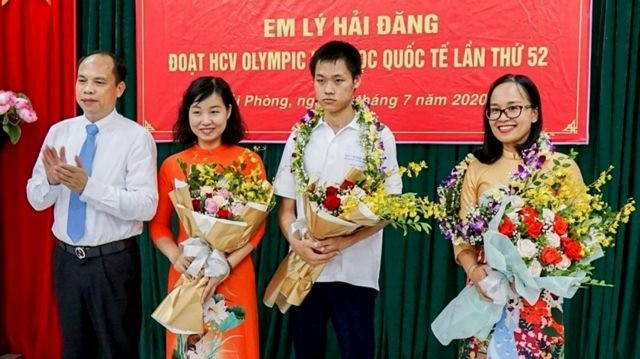 Director of Hai Phong city Department of Education and Training Le Quoc Tien (first, left) congratulates Ly Hai Dang (second, right) for his gold medal at the 52nd IChO. VNA/VNS Photo
Dang, a 12th grader at Tran Phu High School for Gifted Students in Hai Phong city, won a gold medal at the IChO 2020 by scoring 96.97 out of 100 points – ranking in the top five in the competition.

Dang and three members of the Vietnamese chemistry team pocketed four gold medals to help the country finish second in the event.

The first experiments he conducted at home as a fifth-grader were the first steps that brought Dang to chemistry, according to his mother Nguyen Thi Thu Ha.

She said that since childhood, her child has been passionate about reading research books in all fields and loved TV shows related to science.

She recalled that one day when she came home from work, she saw a burnt aluminium pot and was very angry with Dang. He explained he wanted to conduct a chemistry experiment after reading about it in a book.

“At that time, I told him that several chemical experiments and those in other fields should not be done at home, especially by children.”

Dang said he had a passion for reading and research via books and TV shows in his secondary school years.

To satisfy this passion, he spent all his savings on buying laboratory equipment and science books.

He decided to register for the class specialising in chemistry at Tran Phu High School for Gifted Students among the top schools in Hai Phong.

Dang gets part of his curiosity from his mother, a high school language teacher in the city. His father Ly Sy Manh, a sailor of Vietnam Shipping Company, was surprised by his son's results, saying they surpassed his family's expectations.

In 2017, Dang was the highest scoring student in the entrance exam for the class specialising in chemistry of Tran Phu School.

Nguyen Thi Thanh Thuy, Dang's homeroom teacher at Tren Phu School, said she was not surprised that he won a gold medal because he is a talented and motivated student.

Thuy said as soon as he was in 10th grade, Dang had superior knowledge of chemistry compared to his classmates. When he was in 11th grade, he took a number of chemistry-related examinations for 12th-grade students.

However, his mother confided that before the International Chemistry Olympiad 2020, Dang did not want to take the exam for one reason: he wanted to spend all his time preparing for the entrance exam to Ha Noi Medical University.

“With outstanding study results, Dang was offered directly into some universities, but he only dreams of Ha Noi Medical University,” his mother said.

Both homeroom teacher Nguyen Thi Thanh Thuy and the principal Doan Thai Son of Tran Phu School encouraged him to participate in the Olympia contest. He confidently returned to the process of focusing on revision for the exam.

Besides coaching from teachers on the team, Dang found tests of previous years and practised at home. “When I have a difficult lesson, I find and research the methods of homework on the internet by myself.”

“Math, physics and chemistry all require logical thinking, but chemistry is more demanding and needs experiments,” he said. “I want to learn to be a doctor because it is a job to save people.”

Teachers and students of Tran Phu School welcomed home Dang and congratulated him on his impressive achievement. The school has had pupils win gold medals at the event for three consecutive years.

The 52nd IChO 2020 was held in Istanbul, Turkey in late July. All candidates took the remote access exam due to COVID-19.
Vietnamnews