An estimated 540,000 jobs have been generated in Vietnam in the first six months of this year, meeting just 36.5 percent of the set target. 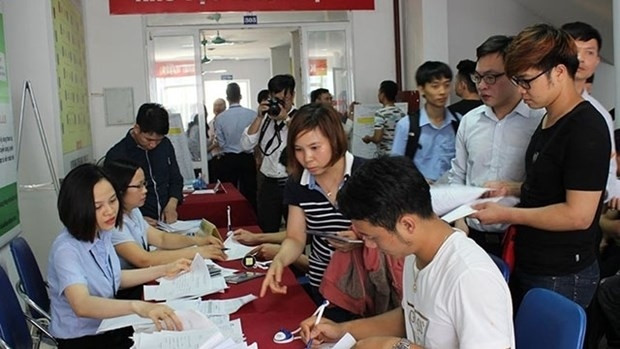 Workers find out information at an employment service centre in Hanoi. Photo: HCES)
According to the Department of Employment under the Ministry of Labor, Invalids and Social Affairs, 120,000 jobs have been created in June alone.

The rate of trained workers was estimated at 62.4 percent in the January-June period while the unemployment rate in urban areas was over 4 percent in the second quarter of this year.

The department has also developed proposals for the update of the labor supply and demand database, surveys on the need of employees in various types of enterprises, forecasts of the labor market, and support of employment transactions in the 2021 - 2025 period.

In addition, the department has suggested that job service centres should enhance the connection between labor supply and demand and shorten the recruitment time in the context that the coronavirus has created huge impacts on the employment market.
VNA