​Workers around the country are enjoying higher Tet (Lunar New Year) bonuses than last year, with the highest amount awarded to an employee reaching as much as VND1.17 billion (US$50,300). 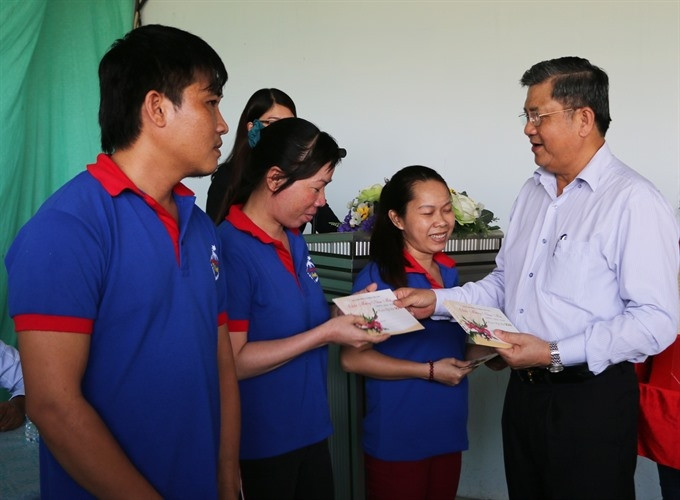 Poor and disadvantaged workers in southern An Giang Province receive gifts from Nguyen Van Giau, chairman of the National Assembly External Affairs Committee on January 11 for the upcoming Tet holidays. Workers are enjoying higher Tet (Lunar New Year) bonuses than last year, according to an official report. Photo: Cong Mao
According to the latest figures compiled from 58 of 63 provinces by the Ministry of Labour, Invalids and Social Affairs, the average Tet bonus is VND6.31 million ($270) per person, or roughly equal to one month’s salary. This represents a 11.4 per cent increase compared to last year.

Up to now, the highest Tet bonus of VND1.17 billion was awarded to an employee in the finance-banking-insurance sector in HCM City.

The highest average amount was recorded at a group of joint stock companies with the State being a major stakeholder. They award an average amount of VND6.825 million to employees, a 9.8 per cent rise year-on-year.

Private enterprises came second with an average of VND6.445 million per person. This amount marked a noticeable increase of 26.6 per cent compared to last year.

The FDI sector ranked third with VND6.236 million while State-owned one member company limited came last with VND5.789 million. Both figures are also higher than those of the previous year.

In Viet Nam, Tet bonuses are seen as a major motivation for employees and they affect employees’ job decisions.

According to the latest report by VietnamWorks under the Navigos Group published in late December, up to 53 per cent of jobseekers regularly seek Tet bonus information when looking for jobs. Meanwhile, more than a quarter of employees surveyed said they would quit if their Tet bonus was not up to expectation.
Vietnamnews