With the theme "Today I live greener," representatives of leaders of the Department of Industry and Trade and Hai Duong Power One Member Co., Ltd. highlighted the meaning of power saving. It is not only to save costs for each family, agency, and unit but also to protect limited natural resources. 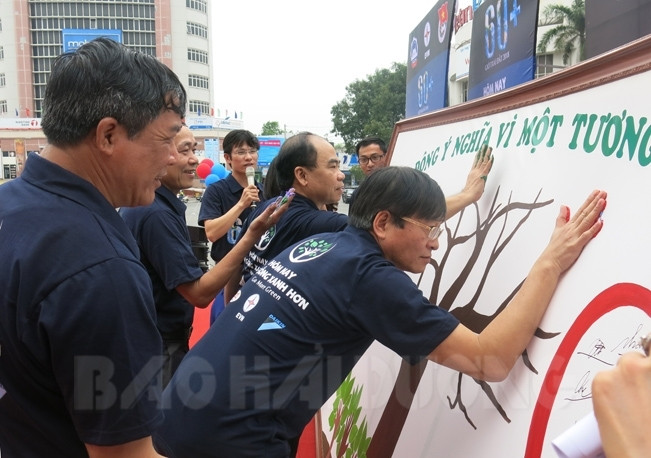 Representatives of leaders of the Department of Industry and Trade, the provincial Youth Union, and Hai Duong Power One Member Co., Ltd. jointly draw a fingerprint painting to show that they will act more actively for a green environment

They also called on citizens and enterprises, especially Youth Union members and youngsters, to develop the habit of turning off unused electrical appliances and limiting the use of energy-consuming equipment.

At the launching ceremony, the participating units presented five volunteer youth clubs. These are the cadre performing power saving activities and dealing with climate change at these units.

Youth Union members and young people parade through main roads of Hai Duong City to call on the community to jointly respond to the Earth Hour
The Earth Hour was first held in 2007 by the World Wide Fund for Nature. This is the 7th year Hai Duong has engaged in the event.
NGOC THUY