Nguyen Duc Tuan (born in 1995 in Hai Duong city) became the No. 1 male table tennis player in Southeast Asia after having won the men's singles gold at the 31st SEA Games.

The victory not only brought the only gold to Vietnamese table tennis at the 31st SEA Games but also helped the Hai Duong player affirm his renown.

To get this glory, the Hai Duong player had to undergo a difficult and stressful journey.

"I was eliminated from the team at the 29th SEA Games, making me so sad. However, I was not discouraged but tried to overcome difficulties, practiced hard, confirmed by renown at domestic tournaments, and got today's result," said Duc Tuan.

Before the final, Duc Tuan greatly stressed out. His senior Nguyen Anh Tu was eliminated in the men's singles semifinal, and the Vietnamese team was suddenly kicked out of two important categories, men's team and men's doubles. The Vietnamese team would have had an unsuccessful SEA Games if the Hai Duong player had not won.

In the men's singles category of this year's SEA Games table tennis, the Hai Duong player was grouped with many big names in the region. 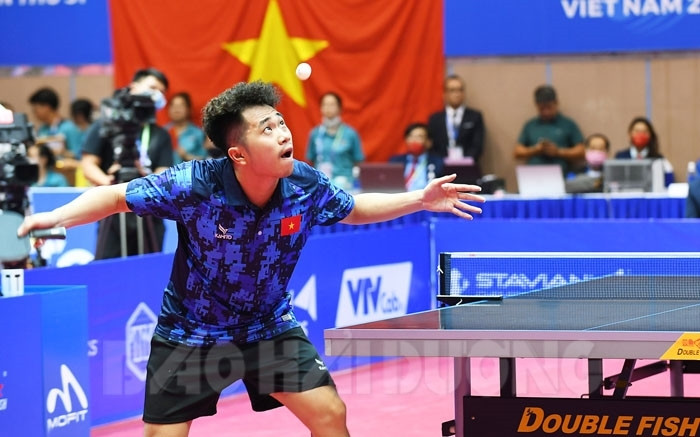 Nguyen Duc Tuan masters the men's singles final of the 31st SEA Games table tennis
Except for Soeung Tola who was a weak opponent from Cambodia, the rest were highly rated. Those were Wong Qi Shen – a newly emerging Malaysian player and Gonzales – a Filipino master of chopping in the region.

Meanwhile, Duc Tuan was inexperienced in playing at the SEA Games; therefore, even coaches did not dare have high expectations of him.

Nonetheless, the 1995-born player defeated those names one after another to reach the semifinals.

In fact, it took Duc Tuan great effort to beat Wong Qi Shen in the first match. His opponent in the semifinal was Singapore's No. 1 player Chew Zhe Yu Clarence, who was considered to be of a higher level. However, Duc Tuan did well and secured a convincing victory over the player to earn a berth in the final.

To date, Duc Tuan has spent 16 years on table tennis. Before becoming the No. 1 male player in Southeast Asia, he had experienced a lot of ups and downs in his career.