Mai Vu, director of the short animated film Spring Roll Dream, has won the Lights On Women prize at the Cannes Film Festival 2022. 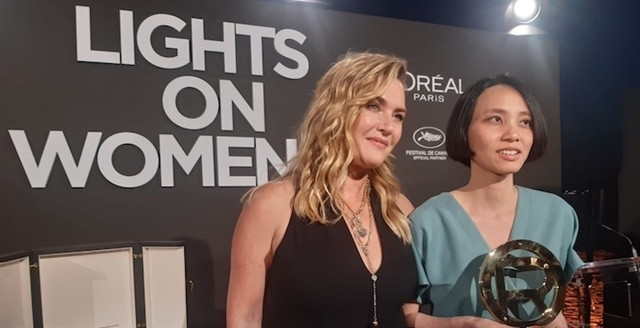 The prize sponsor's representative, Viguier-Hovasse, stated that their goal is to encourage female filmmakers to express themselves and overcome the financial gap, which is one of the reasons why males outnumber women in the film business.

Mai Vu, 30, was born in Ho Chi Minh city. She began her animation career at the age of 19 by creating short films for her friends. She then contributed in the production of Xin Chao But Chi (Hi Pencil), the first stop-motion animated series of Viet Nam.

Mai's experience has increased as a result of her participation in a variety of production jobs. In 2020, she fulfilled her ambition to study abroad in the UK, having graduated in March of this year.

The young director said that it took her two years to finish this nine-minute animated film. She worked on pre-production and the script for six months and then filmed and voiced Spring Roll Dream for eight months.

The film focuses on the life of a Vietnamese family living in the US.

Linh (voiced by Elyse Dinh) is a single mother who is building a stable life for her son Alan (Jarlan Bogolubov). Their family was turned upside down when her father, Mr. Sang (People's Artist Bui Bai Binh) came to visit from his hometown.

For his grandchild, Sang asked that spring rolls be made, while Linh wanted to cook macaroni and cheese. When they couldn't agree on what to eat, the generational divide became clear.

Mai stated that her own father inspired the character of Mr. Sang.

The female director also disclosed that she was impressed by the voice of the character Hoa (starring Bui Bai Binh) in the film The Season of Guavas (2000), directed by Dang Nhat Minh, and that she attempted to attract Binh for her movie.

"His voice is really emotional, so despite the language barrier, my professors and friends understood a little bit about the character while watching the film," Mai explained.
VNS