The friendly match between Vietnam and Borussia Dortmund on Wednesday night ended with a 2-1 victory for Vietnam. 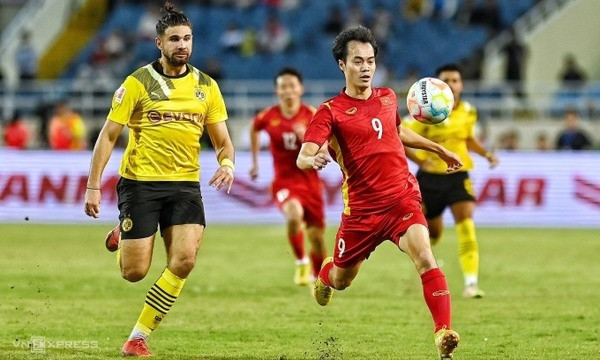 Nguyen Van Toan (in red) paces up against a Dortmund player. Photo: VnExpress/Giang Huy
Going up against Borussia Dortmund, one of the top clubs in Germany, Vietnam decided to push forward in the first minutes, when Nguyen Trong Hoang passed a dangerous ball inside the box but no one was there to get a tap-in.

Dortmund quickly picked up the pace and started pushed back. After a few chances, Dutch forward Donyell Malen scored for Dortmund with a simple finish that hit the post before going in. Dortmund kept the pressure on but couldn’t extend the lead.

In the 36th minute, Nguyen Phong Hong Duy’s shot from the left flank was pushed out by goalkeeper Alexander Meyer, but Nguyen Tien Linh was there in time to tap it in. The first half ended 1-1.

In the second half, both teams made many substitutions so that every player can have a chance to play. 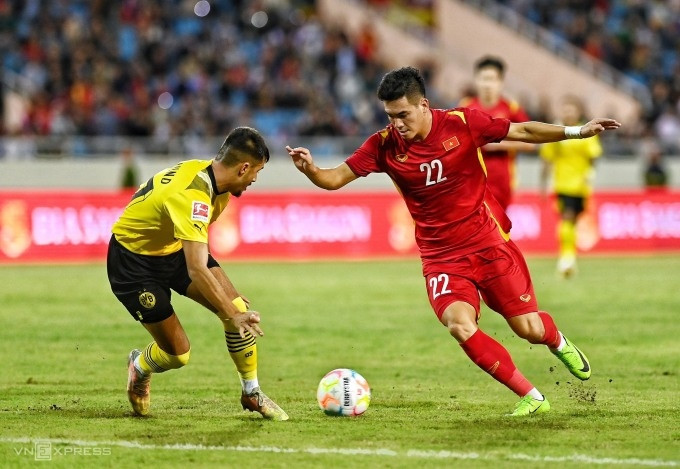 Nguyen Tien Linh dribbles past a Dortmund player. Photo: VnExpress/Giang Huy
Vietnam continued to create relevant chances, but shots of Nguyen Van Toan and Tien Linh were denied by the keeper in the 60th minute. Dortmund responded right after that and they almost scored when Ole Pohlmann’s shot hit the bar.

Three minutes later, Ha Duc Chinh faced the keeper but couldn’t beat him one on one. The winner came in the 85th minute when Vu Van Thanh was fouled inside the box. But due to a problem with the crossbar, the game was paused for a few minutes.

When it resumed in the 90th minute, Pham Tuan Hai successfully took the penalty and to Dortmund players’ surprise, the referee blew a final whistle a minute later when the game was supposed to have four additional minutes.
VnExpress