Various valuable national treasures and antiques unearthed at the world heritage site Baekje, as well as images of Jeju Island, the Republic of Korea (RoK) are on display at an exhibition in Ha Noi. 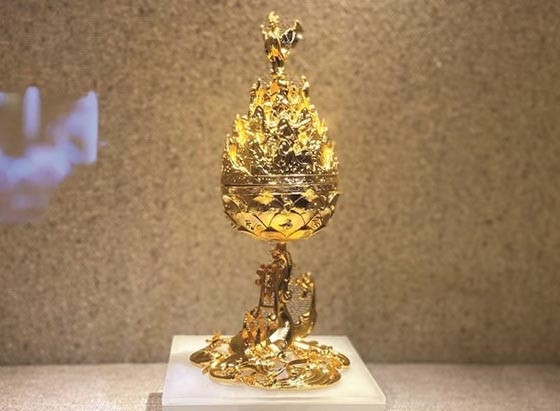 A replica of a gold gilded copper incense burner found at Neungsanri Pagoda in Baekje is displayed at the exhibition. Photo: VNA
Titled "Baekje & Jeju: from Korean Heritage to World Heritage", the event features the Baekje Heritage Site, symbolising Baekje's splendid culture 1,400 years ago, and Jeju Volcanic Island and Lava Cave, which show geological characteristics and the development process. The two localities were listed on the UNESCO World Heritage List in 2015 and 2007, respectively.

Nguyen Van Doan, Director of the Vietnam National Museum of History, said that Vietnam and the RoK has a fairly similar culture and history; especially feudal dynasties in the two countries had a long-term relationship before Christ Era.

"The exhibition will help people in the two countries understand each other more, to go along side by side for the sustainable development and the prosperity of the two countries in the world culture community," he said.

Gwiyoung Lee, director of Baekje World Heritage Centre, said Jeju Island bears the most significant development of geology and the forming of the earth's crust, while the Baekje culture relic complex hosts the flourishing culture of Baekje Reign 1,400 years ago.

"Vietnamese audience can see photos, videos of the sites and experience virtual visit to the sites at the exhibition," he said.

"Visitors can also try on traditional Korean costumes, make lanterns, and taste Korean food and delicacies from Baekje," he said.

Three replica antiques are highlights of the exhibition, namely a golden decoration detail on King Muryeong's crown found in the king's coffin in an excavation in 1971; a gold gilded copper incense burner found at Neungsanri Pagoda in Baekje and a sarira pot found in a stone tower at Mireuk Pagoda.

The event, jointly organised by the museum, Baekje World Heritage Centre, Korea Culture Centre and Jeju authorities, aims to celebrate the 30th anniversary of diplomatic ties between the two countries.

The exhibition will run till October 16 at the museum.

The culinary experience will be available on September 24 and October 1.

Baekje (18 BC to 660 AD) was an ancient kingdom that lasted for about 700 years, mainly in the central and southwest parts of the Korean Peninsula.

The Baekje Heritage Site, inscribed on the UNESCO World Heritage List in 2015, includes archaeological sites from Ungjin and Sabi periods.

The sites consist of royal palaces, temples, royal tombs, and an outer city wall. The Baekje Historic Area is valuable in that it is a representative heritage that shows the essence of Baekje culture and a place where you can vividly confirm the status of Baekje, which contributed to the exchange and formation of East Asian civilisation.
VNA