The book launch is a meaningful activity in contribution to expanding cultural exchange and mutual understanding between the two peoples. 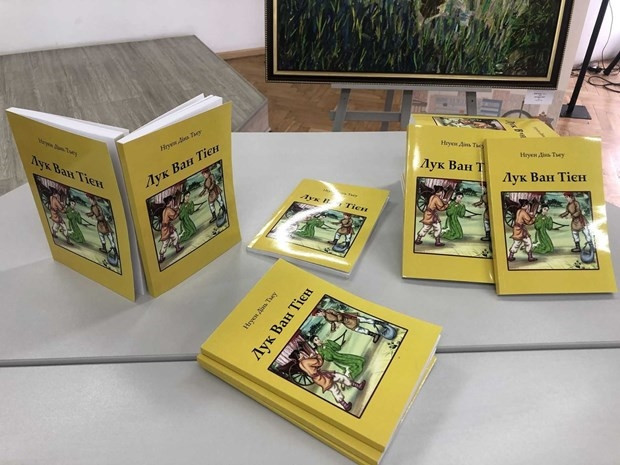 Copies of the book introduced at the event (Photo: VNA)
The Vietnamese Embassy in Ukraine, in collaboration with competent Ukrainian agencies, has organised a book introduction ceremony in Kiev to showcase Luc Van Tien (The Tale of Luc Van Tien), the most popular poem by Vietnamese blind poet Nguyen Dinh Chieu.

In his remarks, Ambassador Nguyen Hong Thach thanked the Ukrainian side for its efforts to publish the work in the local language.

Given the situation in the country, many activities to celebrate the 30th anniversary of the Vietnam-Ukraine diplomatic relations could not be done in line with the plan, the diplomat noted.

Therefore, the book launch, despite its small scale, is a meaningful activity in contribution to expanding cultural exchange and mutual understanding between the two peoples, Thach said.

Head of the ‘Ukraine initiative’ organisation Yuri Kosenko said the year of the diplomatic celebration is a suitable time to step up research on Vietnam.

Stressing that Nguyen Dinh Chieu is both a great poet and a typical anti-colonial poet-soldier, he noted the introduction of his work honours his name and career.

A representative from the association of knowledge Vasili Vasilievich the poem had many profound philosophical contents, which are still valid today.

A theatre under Vasili Vasilievich is working to turn the poem into a play, he said, hoping the play to be staged in September on schedule.

Nguyen Dinh Chieu (1822 – 1888) was born in Binh Duong district, Gia Dinh province (now district 1, Ho Chi Minh city). The poet was known for his nationalist and anti-colonial writings against the French and his exemplary teaching, and was also a popular medical practitioner. He is a role model for people with disabilities around the world. Despite his condition, he studied Confucianism and Oriental medicine.

Luc Van Tien (The Tale of Luc Van Tien), an epic poem written in nom (the old Chinese-based Vietnamese script), was penned in the 1850s. It is regarded as one of the most influential poems in Vietnamese history, along with Truyen Kieu (The Tale of Kieu) by Nguyen Du. The work has been translated into multiple languages, including French, English and Japanese.
VNA