An irrepressible, irresistible Brazil lit up the night sky on Monday with one of the performances of the World Cup to shred South Korea 4-1 and set up a quarter-final clash with Croatia. 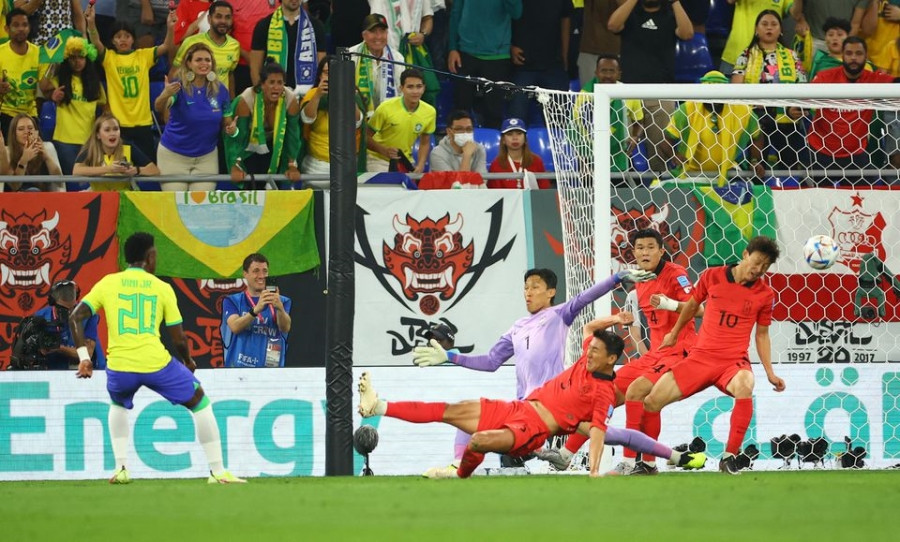 Brazil's Vinicius Junior scores their first goal. Photo: Reuters
The Brazilians brought a beach soccer swagger to the iconic Stadium 974 with a display that simply overwhelmed the Koreans, and likely struck fear into potential opponents.

"We're dreaming of the title, of course," Brazilian talisman Neymar said. "Today was the fourth game, there are three left. We're very focused on getting that title."

After Japan's penalty shootout loss to Croatia earlier, and Australia's loss to Argentina, South Korea's defeat means that all three Asian Confederation teams were eliminated in the first knockout round. 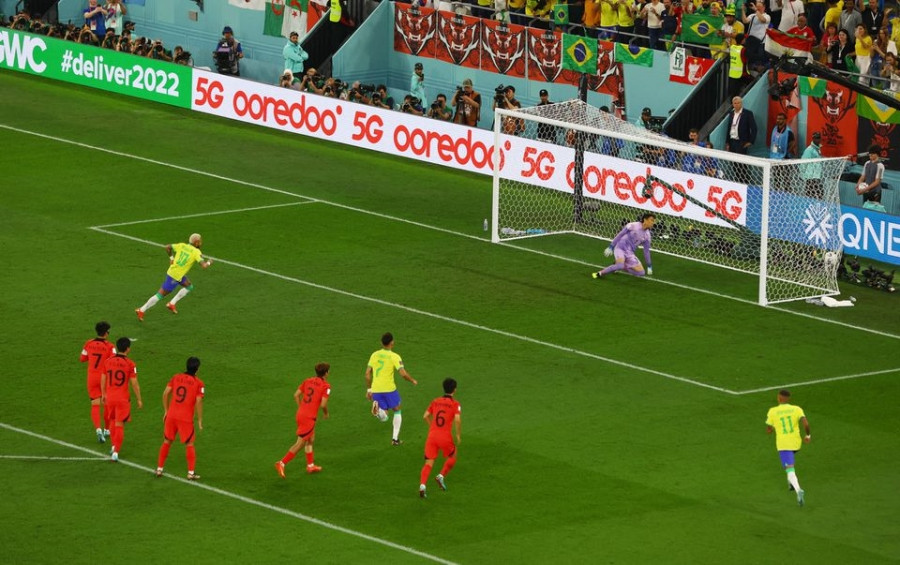 Brazil's Neymar scores their second goal from the penalty spot. Photo: Reuters
Having failed to score in the first half of any match so far this tournament, five-times champions Brazil corrected that with four goals before the break, to end the match as any meaningful contest early on.

They took only seven minutes to breach the Korean defence for the first time.

Raphinha sliced through the red wall -- leaving several of its bricks flailing on the ground -- and, when his cross eluded the closely-marked Neymar, Vinicius Jr was at the far post to gently lift the ball over scrambling defenders and the desperately reaching goalkeeper. 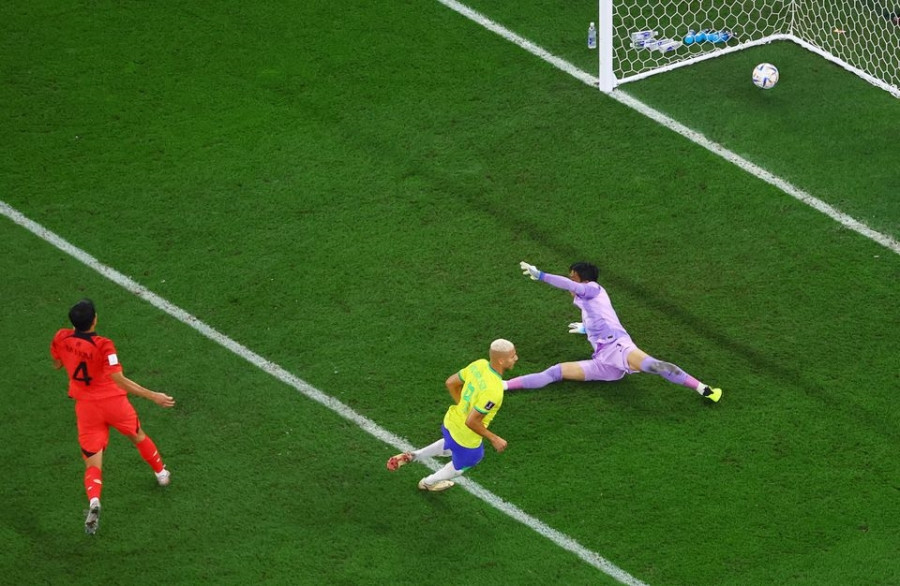 If the Koreans were winded by that early blow, worse was to come. Five minutes later Richarlison was hauled down in the penalty box and the referee instantly pointed to the spot.

Up stepped Neymar for a game of cat-and-mouse with Kim Seung-gyu. The Korean stood to the far right of his goal. Neymar waited, smiling. Finally, he trotted towards the ball in his faltering run-up and left the wrong-footed keeper sitting in the middle of his goal as he stroked the ball home for his 76th Brazil goal -- one shy of the great Pele’s international haul.

Brazil were effervescent in attack and organised in defence, restricting the South Koreans to long shots. By the half-hour mark it was 3-0, thanks to one of the best goals of the tournament. 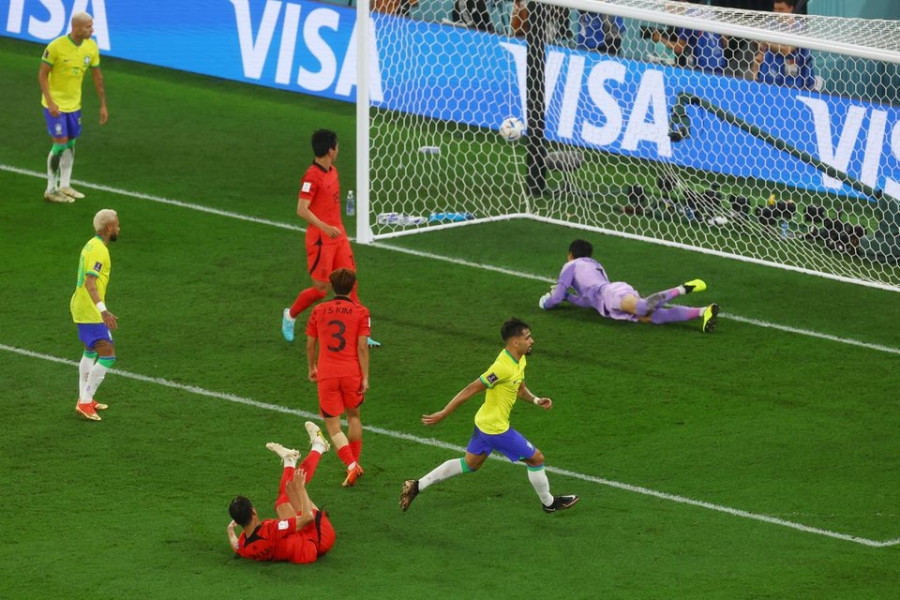 Brazil's Lucas Paqueta celebrates scoring their fourth goal. Photo: Reuters
Richarlison won the ball back in an aerial duel, juggled it on his head and foot before laying off and, in an astonishing move which scythed the Koreans to shreds, ran onto an incisive pass from captain Thiago Silva to easily beat the goalkeeper.

Lucas Paqueta got in on the act, firing home in the 36th minute for 4-0. Brazil had too much quality up front, and were being given far too much space.

That Brazil went in only 4-0 up was as much to do with their profligacy as anything the Koreans could muster in terms of defence.

With their elaborate goal celebrations, the Brazilians had done more dancing than defending in the opening 45 minutes and the second half followed a similar pattern, with goalkeeper Kim single-handedly denying Brazil another hatful of goals. 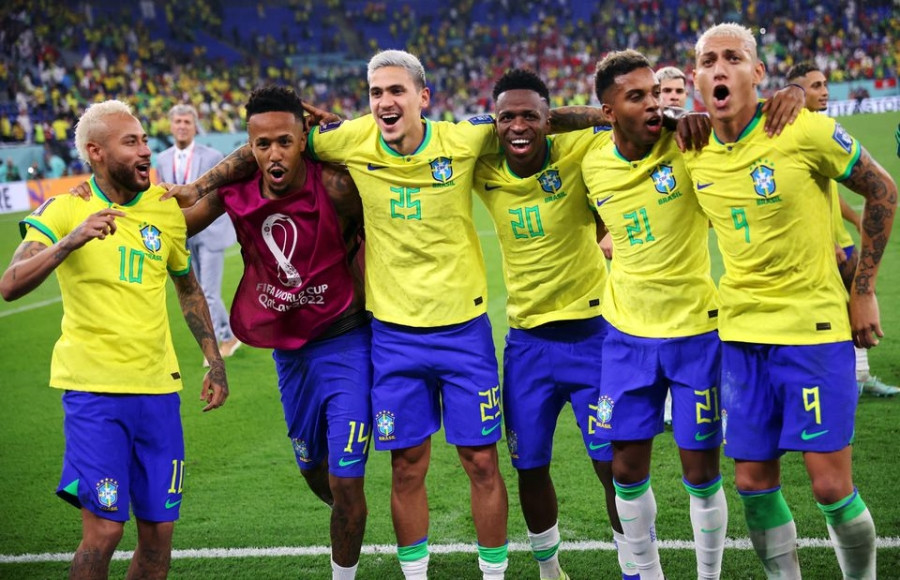 A more prosaic side would have added several goals early in the second half, but seemingly you cannot turn Brazil on and off, and chances went begging due to overly elaborate flicks or backheels when the simple solution would have worked best.

It came back to bite them when Korean substitute Paik Seung-ho thundered home a long distance screamer, aided by a slight deflection, to reward the red team for their endless industry with a consolation goal. 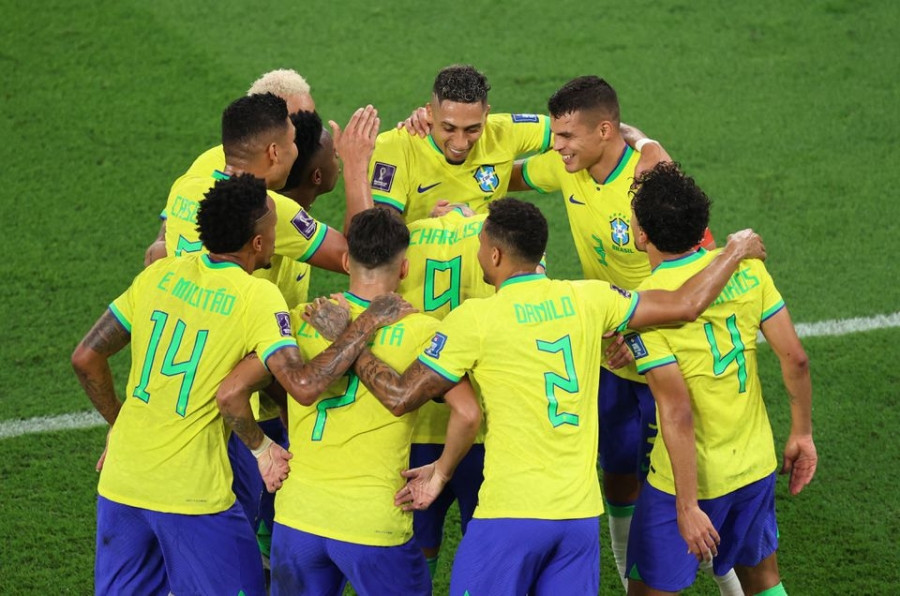 Brazil's Richarlison celebrates scoring their third goal with teammates. Photo: Reuters
Brazil saw the game out – spurning half a dozen good chances before the end – before unfurling a banner of Pele, and dancing once more to celebrate with fans.

"Let’s hope we can carry on dancing all the way to the final," Vinicius said. "And we are also sending a big hug to Pele. Let's hope he recovers quickly."
Tuoitrenews